LETHBRIDGE -- What started as a casual bike ride through the coulees turned into a nightmarish close call for 14-year-old mountain biker Raiden Peter and his friend.

The two teens had been looking for new trails and jumps when they accidentally rode straight into a rattlesnake den.

"As my friend went by, I think he like set the snakes off or something because then as I was going by, one jumped at me," said Peter.

"I just threw my bike right at it and just ran like 30 feet away. I was so scared."

The boys quickly called the City of Lethbridge rattlesnake mitigation program for help retrieving their bikes.

Within 45 minutes, ecological consultant Ryan First Diver, also known as the 'Rattlesnake Wrangler', was on the scene to help the terrified teens. 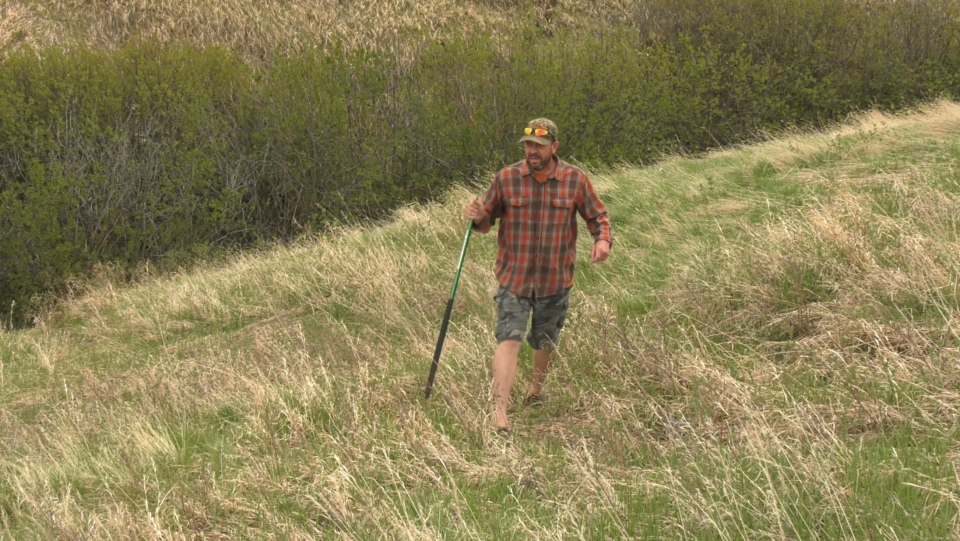 "I've been in that position where you accidentally walk into a den and what you see around you is writhing, hissing, rattling snakes diving for holes and it's scary," said First Diver.

Luckily, no one was bit in the process and the boys got their bikes back shortly after help arrived.

"My heart was racing and I was just (feeling) relief," said Raiden Peter. “A lot of relief and thank God nobody got bit.”

First Diver has since posted the interaction on his YouTube account where he catalogues most of his rattlesnake calls.

There certainly isn't a shortage of rattlesnakes in the Lethbridge area, especially on the west side of the coulees where there's an abundance of sunshine for most of the day.

First Diver said he's expecting this season to be busier than usual considering the fact that more people will likely be staying closer to home and walking around snake country given the current travel restrictions, but recent construction is also adding the influx of calls.

"The last three or four years, with all the development on the (city's) west side with the new building at the university, in Riverstone and the development in the canyons, the numbers have gone high," he said.

"When I first took over the program I was getting like 60 to 80 calls but in the last three or four years the average has been like 160 to 170 calls per season."

First Diver added that some of the increase is likely thanks to the public awareness campaign to spread the word about the city's rattlesnake mitigation program as well.

Although many people in the community are terrified of the cold-blooded animals, experts are hopeful that people who share a hometown with prairie rattlesnakes will educate themselves and work to preserve the resilient species.

"It's very cool that we have this rattlesnake that somehow manages to make a living as far north as Canada," said co-owner of Snakes on a Plain Sheri Monk.

"I think we kind of owe it to the species to protect it a little bit and realize that it's not out to get us, and that we can give it a helping hand."

Sheri and her wife Alyssa started their snake-safe fencing and education company near the beginning of the pandemic to help protect people and their pets, as well as the snakes that call parts of southern Alberta home.

First Diver has been working as the city's go-to 'rattlesnake guy' for about nine years and says he has still never been bitten, although he did get rattlesnake venom in one of his eyes last summer causing him to lose nearly all vision out of his right side.

Working with rattlesnakes isn't a common job for someone living in Canada, but for First Diver, he wouldn't have it any other way.

"I've been around snakes all my life. I grew up with pet snakes, constrictors and exotics and stuff. I free held my first rattlesnake when I was about 16 or 17 years old and I've been around venomous snakes more throughout my adult life," he said.

There has never been a reported death from a prairie rattlesnake bite in Alberta.

It's illegal to kill, possess, or damage rattlesnake areas and there are significant charges and fines for tampering with the species.