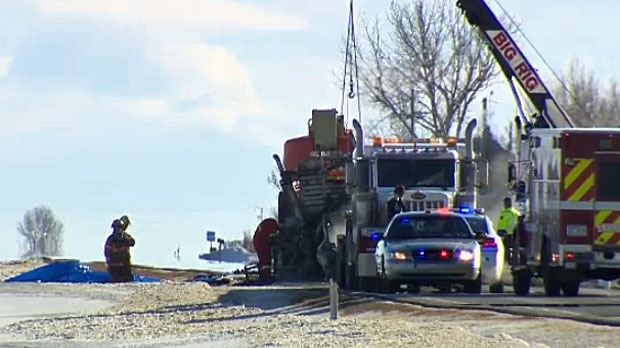 One person was killed in the crash near Cheadle, Alberta on Thursday, Feb 20, 2014.

At least one person has died in a head-on crash on Highway 24 near Strathmore and police say the roadway will be closed for several hours while they investigate.

Emergency crews were called to the crash on Highway 24 between Glenmore Trail and the Trans-Canada Highway at about 12:10 p.m. Thursday.

Strathmore RCMP say initial indications are that a southbound vehicle crossed the centre line and collided head-on with a northbound semi tractor-trailer unit.

Investigators say both vehicles caught fire and the debris field was extensive.

Fire Departments from Strathmore and Wheatland County attended the scene to extinguish the vehicle fire.

RCMP is investigating and closed Highway 24 for several hours.