Record snowfall in Calgary over the weekend

Record snowfall in Calgary over the weekend 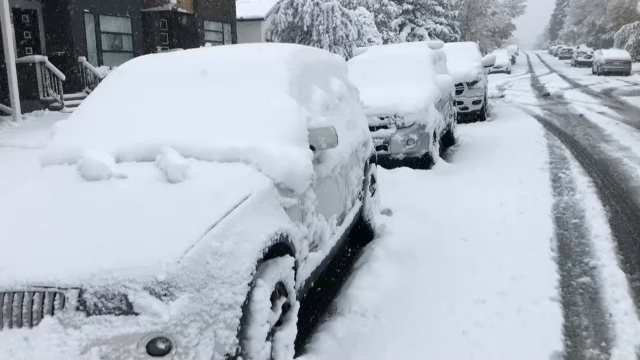 After an unseasonably warm start to the fall, Calgary saw a record-breaking dump of snow over the weekend.

Environment and Climate Change Canada says 19 centimetres of snow was recorded at the Calgary International Airport on Oct. 22 – breaking the previous snowfall record for that day, set in 1939, by one centimetre.

In total, 23 centimetres of snow fell from Friday night to Sunday morning.

Snowfall records at the Calgary International Airport have been kept since 1881.

All that winter we’ve been avoiding in #YYC came all at once #ctvcalgary #snow #calgary #abstorm pic.twitter.com/RQyvUtjlhn

The City of Calgary follows a seven-day snow clearing plan, which is activated as soon as snow stops.

First, crews take on Priority 1 routes, which include roads with more than 20,000 vehicles per day, as well as downtown cycle tracks. Deerfoot Trail and Stoney Trail are maintained by the provincial government.

Crews then focus on Priority 2 routes — roads that carry 5,000 to 19,999 vehicles a day — like Kensington Road and Acadia Drive, as well as designated emergency routes around hospitals and fire stations, bus routes and roads with on-street bike lanes.

After that, crews turn to clearing Priority 3 to Priority 4 routes, which include residential areas and school and playground zones.

As of Monday at 7 a.m., the city's website indicated crews were clearing Priority 2 roads.

The city's annual snow and ice clearing budget is $40.7 million.