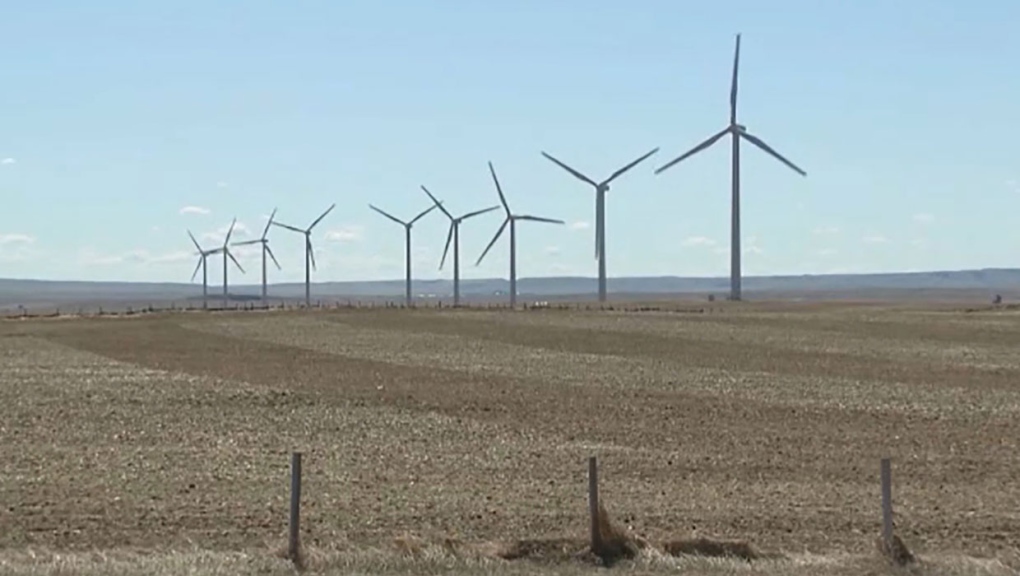 The Fraser Institute has published a paper indicating that if Alberta converted its power generation away from fossil fuels, it would result in huge added costs. (File)
CALGARY -

A new report published Thursday says a move to convert Alberta's energy grid to renewable power would result in 'substantial costs' for rate payers but the Alberta government says it's a scheme to oppose renewable resources.

The Fraser Institute, an independent Canadian public policy group, says data they've examined shows that if Alberta shut down its coal-fired power plants, which account for about 40 per cent of the province's energy generation, it would have a marked effect on greenhouse gas emissions. It estimated they would drop by between 26 and 40 per cent.

However, the group says operating a green energy grid would add $1.4 billion in costs.

"Despite what advocates claim, renewable power—including wind and solar—isn't free and forcing a transition on Alberta’s electricity grid would have substantial costs for Albertans,” said G. Cornelis van Kooten, economics professor at the University of Victoria, senior fellow at the Fraser Institute and author of the study.

The document, titled Canadian Climate Policy and its Implications for Electricity Grids, explained that part of the higher costs comes from the requirement to build and maintain backup power from natural gas sources when wind and solar are not available.

When the same principles are applied on a nation-wide level, van Kooten says it would cost Canadians much more.

"Based on cost estimates from Alberta, and Ontario's experience with subsidies to renewable energy, the costs of relying on changes to electricity generation (essentially eliminating coal and replacing it with renewable energy sources and gas) to reduce national CO2 emissions by about 7.4 per cent range from some $16.8 billion to $33.7 billion annually. This constitutes some one to two per cent of Canada’s GDP."

That's even with the knowledge that that reduction in emissions is below the federal government's target of 40 to 45 per cent below 2005 emissions by 2030, the group says.

"This is a huge challenge that, when considered on a global scale, will do little to stop climate change because emissions by developing countries are rising faster than emissions are being reduced in developed countries," van Kooten said.

Tim Taylor, an Earth and Environmental Sciences instructor at Calgary's Mount Royal University says all estimates, including those made by the Fraser Institute, are based on assumptions.

"It seems that the estimate is comparing new solar and wind to existing coal. That is not a true comparison (as) the coal plants will all wear out, some sooner than others and will need to be replaced," he said in an email to CTV News.

Taylor says any sort of shift from electricity generation from fossil fuels to renewables will take "significant planning."

"Solar and wind are changing at a rapid pace as is the technology changing rapidly as well."

He does agree, however, that transitioning from coal power will not fully realize the federal government's greenhouse gas emission targets.

"That is a much more intricate problem than simply getting rid of coal. Decarbonization is an economy-wide issue," he said. "But I'm always wary of simplified cost presentations. And equally, simplified solutions to decarbonization. It will not be simple, but does need to be done."

The provincial government, when presented with the data from the Fraser Institute report, said that it is focussed on providing "affordable and reliable electricity" to Albertans.

"As we work to foster an environment to ensure this in the long term, we recognize the reality that current global energy supply shortages and other factors will have impacts on short-term prices. Unlike past governments we will be upfront with Albertans and not try to hide costs by shifting the burden to taxpayers through subsidies and other means," said Margeaux Maron, acting chief of staff for Dale Nally, Alberta's associate minister of natural gas and electricity.

Maron classifies the Fraser Institute's findings as an "unrealistic and costly scheme" aimed at renewable resources.

"Albertans are best served by a mix of both market based renewables and reliable, high efficiency natural gas generation."

Public Safety Minister Marco Mendicino is defending the RCMP’s yearslong and undisclosed use of spyware capable of accessing cell phone and computer microphones, cameras and other data as part of dozens of major investigations. Testifying before a parliamentary committee on Monday, Mendicino said the national police force's use of these tools has only be permitted in 'the most serious offences.'

A suspect already in handcuffs has allegedly managed to overpower a Toronto police officer and steal their SUV, sending police on a wild early morning chase.