Residents opposed to a proposed auto mall in Springbank are gathering signatures to present to Rocky View County.

The county sent letters to nearly 200 homes this summer notifying residents of a proposal by Bridgebank Development Ltd. to develop 62.27 acres, near the intersection of Old Banff Coach Road and 101st Street Southwest, into a shopping complex for auto dealerships.

"The developer has simply applied for re-zoning and the county has to, by their rules, deal with it," said Springbank resident Larry Benke. "So one of the first steps they’re taking is to find out what the community feels about it."

Benke has drafted a letter to the county opposing the rezoning and he's collecting signatures from neighbours who feel the same way. "So far for the people I’ve talked to 100 per cent are opposed to this particular development."

Attila Varga's name appears on the petition. He and his family live in one of the homes adjacent to the development site.

"This auto mall is going to be literally in our backyard," said Varga adding, "we moved out here for the serenity of an acreage."

He fears a commercial development will increase noise and traffic in the area.

Benke says the arrival of dealerships would likely bring unwanted behaviour to streets in the area. "It’s also traffic that isn’t necessarily desirable in your neighbourhood.  It will be people test driving, stunt driving, getting lost, all those kinds of things.'

Bridgebank Development Ltd. provided the following statement to CTV regarding its proposal:

"This application is conducive with auto uses that have already been approved across the street on 101st street and helps Rocky View County to expand and broaden its tax base to include more commercial uses that help in keeping the residential tax rates lower."

In a statement, Rocky View County officials say the application is new and the County has not conducted analysis at this time.

"On September 10, the application will be brought before Rocky View County Council.  Council will either refuse the application, or order a report by giving it First Reading.  First Reading does not mean Council agrees or disagrees – it simply means they want an analysis and a complete report prepared.  If First Reading is granted the report will be written and made available to the public for comment.  Nearby landowners will be directly contacted and asked for input.  The entire matter will then go to a full public hearing for consideration." 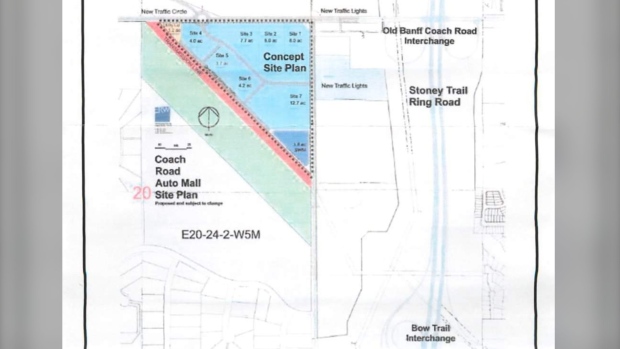