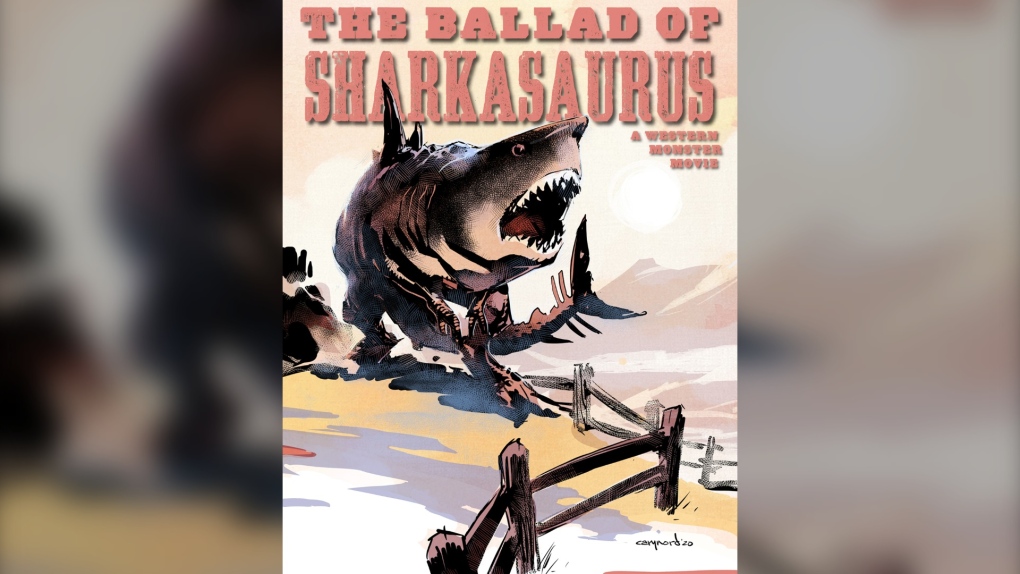 A Kickstarter campaign is launching Sunday to help create The Ballad of Sharkasaurus. (Courtesy Spencer Estabrooks)

A Kickstarter launch party is planned from 5 to 10 p.m. Sunday at Two House Brewing on 10th Avenue S.W., aimed at raising $12,000 needed to create a 4.5-metre animatronic puppet of Sharkasaurus.

The brainchild of filmmaker Spencer Estabrooks, Sharkasaurus was originally conceived as a 10-minute short film after he won the first-ever TELUS Storyhive prize.

That developed a minor cult following after touring film festivals around the globe, leading to the creation of a graphic novel with the help of Renegade Arts Entertainment based in Canmore, along with a nearly three-metre high cardboard cut-out, both of which Estabrooks and crew spent the next year taking to horror and comic conventions.

And now his sights are set on bringing the half- megalodon, half-tyrannosaurus back to the big screen in The Ballad of Sharkasaurus.

"I thought, 'what about Sharkasaurus in the old west?'" said Estabrooks. 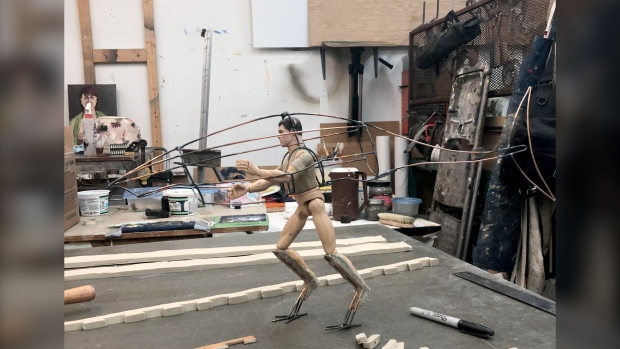 A mock up of how the Sharkasaurus costume will fit over an actor. (Courtesy Spencer Estabrooks)

The storyline involves a group of coal miners who unearth a Sharkasaurus in the Badlands of central Alberta, which then wreaks havoc on the town of Drumheller and its inhabitants. Adding to the terror is the fact that as a half-shark and half- tyrannosaurus, it can either 'swim' underground, or run on land.

"Whatever catches prey faster, underground is stealth, overground is speed, either way is deadly," said Estabrooks.

The animatronic Sharkasaurus is being designed and built by artist Brian Cooley, who is best known for sculpting life-sized dinos for the Royal Tyrrell Museum and National Geographic.

"All the money is going to go for the exterior foam, the painting, the latex work, all that stuff to build this," said Estabrooks.

Once the Kickstarter campaign kicks off, the group will have 30 days to raise the $12,000 needed to make the puppet, and different donation amounts will earn different rewards.

Those who donate $20 will get a digital copy of the film, along with a digital print of Cary Nord artwork while the first five people to donate $650 will receive an IMDB credit, as they'll be included in the *spoiler alert* town slaughter scene, along with a professional photoshoot with Sharkasaurus. And a $1,000 donation means Sharkasaurus will show up at an event of your choosing.

"It will come to your wedding, bar mitzvah, birthday party, whatever it is, and have a small performance there," said Estabrooks.

The group has already received the $15,000 needed to make the movie through Alberta Foundation for the Arts.

Estabrooks says if the Kickstarter is successful, he hopes to begin shooting in June.

"If everything goes according to plan, I think we can shoot, edit and have Sharkasaurus play maybe at the end of September," he said.

Sunday's event will include a screening of the original Sharkasaurus short film, along with three other westerns directed by Estabrooks — Dead Walkers, Itchy the Blind Gunman, and Sugar Skull Man.

And Sugar Skull Man will be played in 3D for the first time.