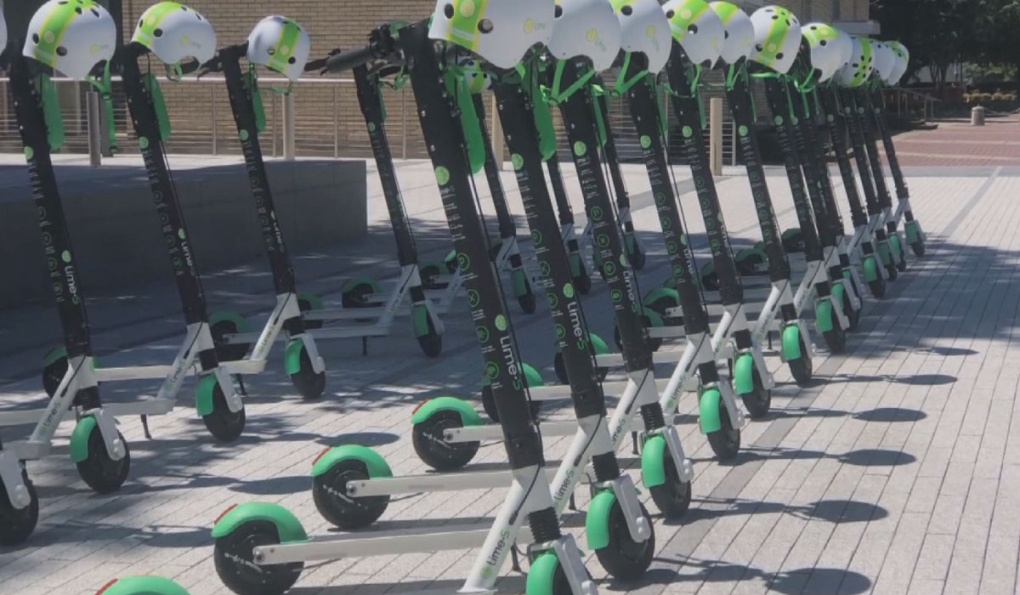 The city says aside from a handful of people misusing e-scooters on Calgary's streets and even tossing them into the Bow, the pilot project has been very popular.

It's been nearly a month since the city brought its e-scooter pilot program online and officials say it's been going great despite the fact there aren't many of the devices on the road yet.

The city allowed a number of companies to introduce the electric-powered scooters to Calgary's streets on July 13 after the province granted an exemption under the Alberta Traffic Safety Act for the devices in June.

Officials say there's been a lot of interest.

Each company in the pilot program can operate a fleet of 1,000 scooters, provided they can pay the permit fees and manage the associated costs.

So far, Carswell says Calgary's pilot has seen about 150,000 rides.

"Comparatively they've almost matched what we've seen in the bike share. You have to remember that there were only 400 bikes on the road for a majority of the winter and spring this year. It's maybe not super fair to compare the two, but it's been wildly popular for sure."

The program has also had its fair share of challenges too, Carswell said.

There have been reports of multiple people riding scooters at the same time and even minors taking rides on the e-scooters. Carswell says the city is aware of these issues and is working to educate people about proper usage.

"We are going through our channels to ensure that riders are riding in a safe and responsible manner."

He adds when users sign up with the companies offering the services, it's expected that they complete some education material before they get on board.

Carswell adds there is also a very small percentage of people who are mistreating the e-scooters, as seen in a number of photos posted online of the devices sitting at the bottom of the Bow River.

As a Calgarian and tax payer I care about the city. Just wanted to share what I saw today below the Peace bridge and in the Bow river. Two scooters in the river, one towards DT end (East) and other to Memorial rd end (West). @cityofcalgary #yyc #yyccc pic.twitter.com/V2C012ei5K

He says the companies are working with city security officials to look at following up with reports of the scooters ending up in the drink, something he calls a "black eye" on the project.

"It's their property, so it's in their best interest to protect that property."

The pilot project is expected to last until the fall of 2020.