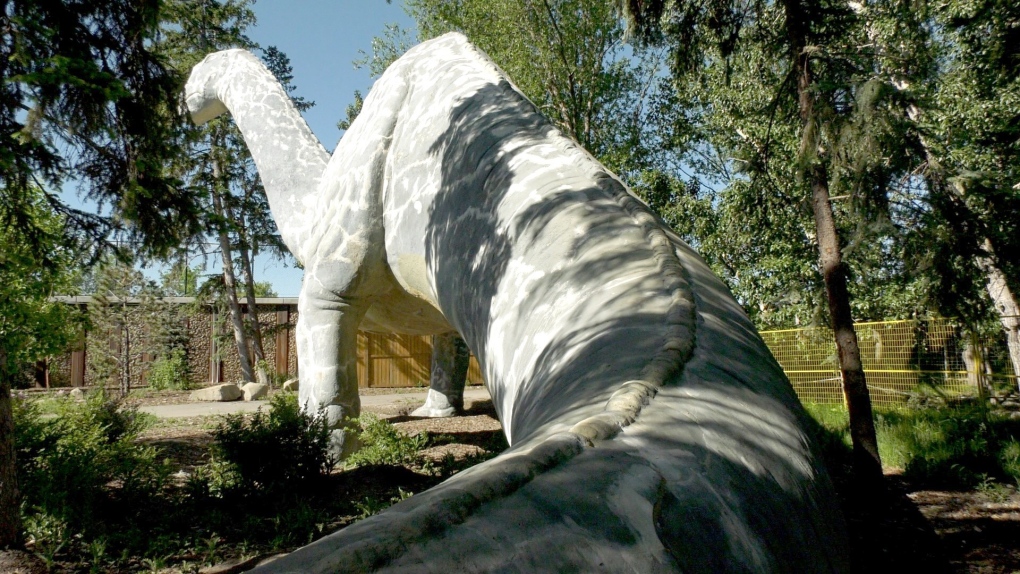 Work is underway on a $100,000 makeover to Dinny the Dinosaur at the Calgary Zoo.

CALGARY -- Two years after the interior was restored, Dinny the Dinosaur is getting an exterior makeover at the Calgary Zoo.

"It's a parging on cast concrete and the parging was starting to crack and fail," said Pierre Chartrain, the Calgary Zoo's senior manager of projects.

"So the conservators had to remove a small portion and fill the cracks with a compatible material."

It takes a month for that material to fully dry before the replica dino can be painted. Workers found several layers of paint on Dinny during a 2019 assessment.

Two years ago the city and zoo split a $200,000 structural restoration on the dinosaur's interior.

The statue was sculpted by John Kaverna in 1935. It was then revealed in 1937, along with more than 50 other smaller dinosaur sculptures for the reopening of the Natural History Park.

Dinny is the lone remnant of that park, which was dismantled in 1983.

"If you're a life-long Calgarian, you know Dinny," said Stacey Smith, the zoo's senior development officer for annual giving.

Smith says the exterior restoration will cost $100,000 and so far, $70,000 has been donated through a fundraising campaign.

"In these times of COVID and everything that's going on, the community support just completely amazes me and blows me away every single time and (the public) stepped up again to help us with this project," said Smith.

Dinny is a favourite of children of all ages and has been for decades.

Lori Dudley remembers coming to the zoo with her family and a picnic lunch her mom made back when entry was free. At that time many children would scale the sculpture and because there were no signs or security to keep them off, it was up to parents to supervise.

"And the story was told to us, 'don't climb on because it's too dangerous,'" said Dudley. "It was very inviting for all of us kids but the story was there was a girl that climbed it and she fell off and broke her arm, so don't climb it because that will happen to you."

Today climbing the 86-year-old stature is not allowed but the plan is to landscape a family park around the iconic dinosaur, complete with a 'mini-Dinny' for kids to climb.

Dinny will likely be covered in green and brown tones when painting begins in the first week in July, which should take three weeks to complete.

The new park and refreshed Dinny will be officially unveiled this fall.

Learn more about the restoration project on the zoo's website.