If you were walking down the street, it would be pretty hard not to recognize 13-year-old Desmond Burns because more than likely, he’d have a squash racquet in his hands.

Burns is a member of the Glencoe Club and he loves the sport. Despite only playing the game for about four years, he’s ranked fifth in Alberta and 47th in Canada in the Under 15 division.

Burns says he’s pretty happy about that because of his age.

Burns was getting ready for the provincials just before the COVID-19 pandemic shut down sports facilities, including the Glencoe Club, where he was practicing every day.

But even though the pandemic shut sports down, Burns was bound and determined to keep playing the sport he loves. His mom Carmen Davison says Desmond made their home his squash court.

“You know we’ve just brought the activities that were in other places into our home,” she said.

“So there’s squash going on in all places of our home.” 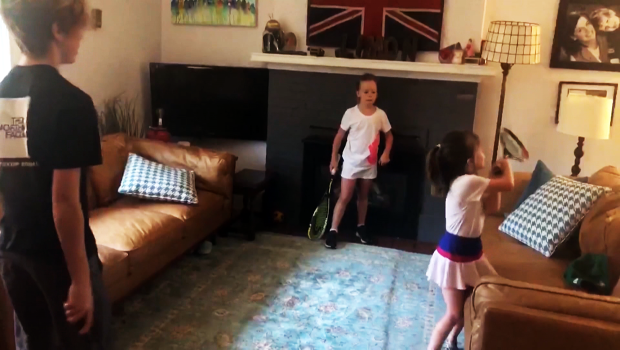 Like in the living room where they’ve built a contraption so Desmond can play squash with his two sisters and teach his two-year-old brother the finer points of the game.

Some of the walls in the house have also been getting a pretty good workout. Burns admits it’s left a few marks.

“Ah not lots. My mom just kind of cleans them off. But yeah at the beginning there were quite a few," he said.

Not so fast, said Davison. She said when things get back to normal, she’ll definitely have some repair projects to do around the house.

“I think I’ll have to clean and re-paint the walls," she said. "So that will be my little chore.”

The highlight through all of this for Desmond was taking on the toilet roll challenge.

Burns had to hit a ball between his legs with his back to the target and have it land in the roll of toilet roll.

It was hard and took him a lot of time but he says he was bound and determined to to complete the challenge.

Davison said she was also very excited for her son.

“You know he was practicing for hours and I didn’t think he was going to get it in. And then we heard the shouting coming from downstairs,” she said.

“It was so exciting - and you can tell (CTV News weatherman)  David Spence it wasn’t fake!"