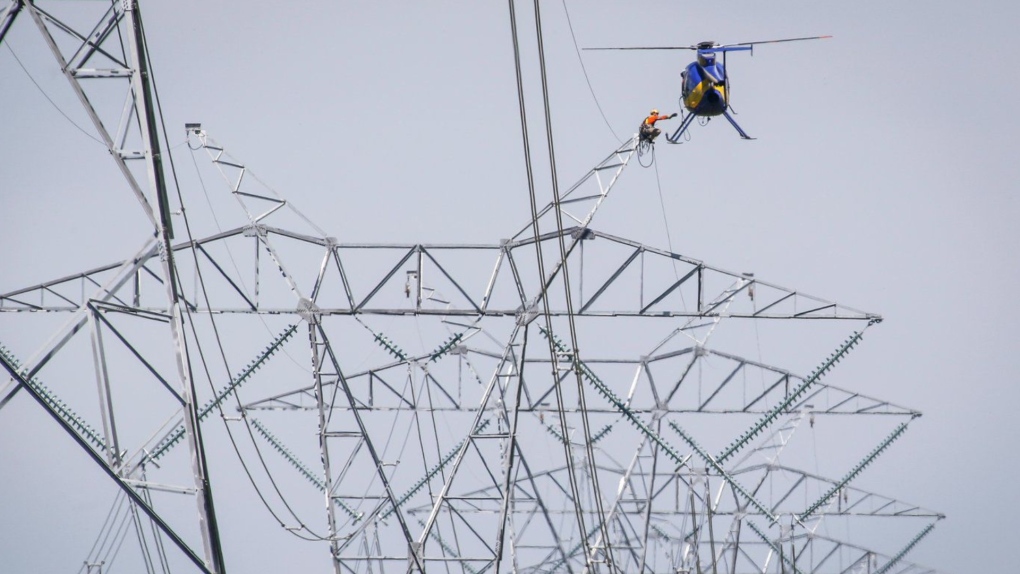 A lineman reaches for a lift from a helicopter on powerlines near Carstairs, Alta., on July 23, 2014. Alberta's utilities watchdog has shut down a plan from AltaLink to give ratepayers a refund. (THE CANADIAN PRESS/Jeff McIntosh)

Alberta's utilities watchdog has shut down a plan from a power transmission company to give ratepayers a refund, saying the small cash payout proposed by AltaLink would ultimately cost consumers millions more than it returned.

"AltaLink's proposal would not result in a just and reasonable tariff even though it would provide Alberta's electricity customers with some modest relief on their electricity bills," says the decision from the Alberta Utilities Commission.

"AltaLink's proposal would immediately require … customers to pay back its 'refund' with interest and carrying charges over the next 46 years."

The decision, released Friday, comes after AltaLink — Alberta's largest electricity transmitter — twice asked the commission for permission to give consumers a refund. AltaLink said the opportunity for a refund was generated by slower-than-expected depreciation of some company assets.

"Alberta consumers are feeling the pressure of high energy prices on electricity bills,” said AltaLink president Gary Hart in a May 2 press release. “Because we won’t require these funds for an extended period of time, we believe it makes more sense to put this $120 million back into the pockets of Albertans who need it most.”

AltaLink's proposal would have reduced the average household bill by $5 a month.

But the commission pointed out the refund would have been financed by a bank loan, not cash. With interest, carrying charges and other fees, the loan would have ultimately cost more than $250 million by the end of its term — all of which would have been recouped from consumers.

"There is no persuasive reason why future customers should pay higher electricity rates for 46 years given the modest relief in 2022," the commission wrote.

"AltaLink's proposal is more properly characterized as a loan. Refunds do not have to be paid back by the person receiving the refund."

The commission calculated that not only would the refund be paid back more than double by those who received it, AltaLink would likely record an $85-million profit over the life of the deal, the commission said. And it rejected the company's own accounting for the impact of the proposed refund.

"The review panel found AltaLink's assumptions … unreasonable and designed to achieve a result, namely to show a net present benefit to consumers."

The commission also said AltaLink's concerns over the impact of inflation on its customers was "in contrast" to its request to increase executive base pay by 10 per cent.

"While we’re disappointed that the Commission has reached this decision, we respect their position," said AltaLink spokesman Scott Schreiner.

"AltaLink remains focused on delivering solutions to reduce the cost of its service to customers. As part of its Flat for Five commitment, AltaLink has delivered on its promise to not raise its rates during this five-year period."

The Consumers' Coalition of Alberta appeared before the commission to oppose AltaLink's proposed refund.

"When you look at all the consequences, all the costs were greater than this short-term benefit," said lawyer Jim Wachowich.

Wachowich suggested the refund was an attempt by the company to position itself as helping consumers in a time of high inflation. A better approach, said Wachowich, would be for AltaLink and other utilities to reduce their profit expectations.

"They didn't want to do that."

Commission spokesman Geoff Scotton said the decision was final and represented AltaLink's last avenue of appeal, short of requesting a special hearing before the Alberta Court of Appeal.

This report by The Canadian Press was first published May 17, 2022.