Beakerhead bursts out on Calgary streets 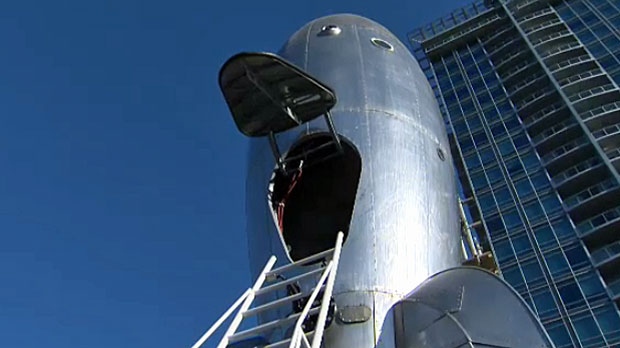 The Raygun Gothic Rocketship was created by the Five Ton Crane Arts Group.

An interactive exhibition of art, science and engineering is taking place for the first time in Calgary and the week long event showcases the ingenuity and creativity of Calgarians.

Beakerhead 2013 is on from September 11 to 15 and features a variety of events at venues around the city.

The Raygun Gothic Rocketship was brought in from Oakland, California and stands proudly outside the Beakerhead launch site in Victoria Park.

“It was originally built for Burning Man in 2009 and that was our first landing spot. Since then it’s been around to a few other places like NASA,” said Jay Kravitz. “There’s all these exhibits inside, there’s 50 plus people involved with our group, so a lot of them have built and spearheaded exhibits inside.”

The launch site is the event’s information centre and guests can climb inside the 40-foot rocketship for a better look.

More than 70 events will be held during the four day festival including; live street performances, engineering demonstrations, speakers, art walks and networking opportunities.

Organizers say the citywide interactive movement was created to bring together arts and engineering and to make science more accessible.

For more information and event schedules, visit the Beakerhead website.