Legendary Flames trainer Jim "Bearcat" Murray passed away on Tuesday morning after taking a fall in his backyard on the weekend.

Murray was the Flames' trainer from the time they arrived in Calgary in 1980 until his retirement in 1996.

"The entire Calgary Sports and Entertainment Corporation family extends our deepest condolences to the family and friends of Jim 'Bearcat' Murray, who passed away on June 14 at the age of 89," said the team in a statement.

He was born in Vulcan, Alta. in 1933 and his family moved to Okotoks when he was a young child. As of late 2021, he was still a resident of Okotoks alongside his wife Shirley.

Prior to his time with the Flames, Murray served as the trainer for the Calgary Centennials and Calgary Wranglers of the Western Hockey League and the Calgary Cowboys of the World Hockey Association. He also worked as an assistant trainer with the CFL's Calgary Stampeders.

He was inducted into the Hockey Hall of Fame in 2009 in the athletic trainer category.

ONE OF THE BEST TRAINERS

Murray was a self-taught trainer known around NHL circles as one of the best.

He was very popular and even had his own fan club.  Former Flame Perry Berezan said "Bearcat" was a legend for a reason.

"His status as a legend, it's worthy," Berezan said. "There's nobody who's probably had an impact as a trainer like Bearcat across the National Hockey League." 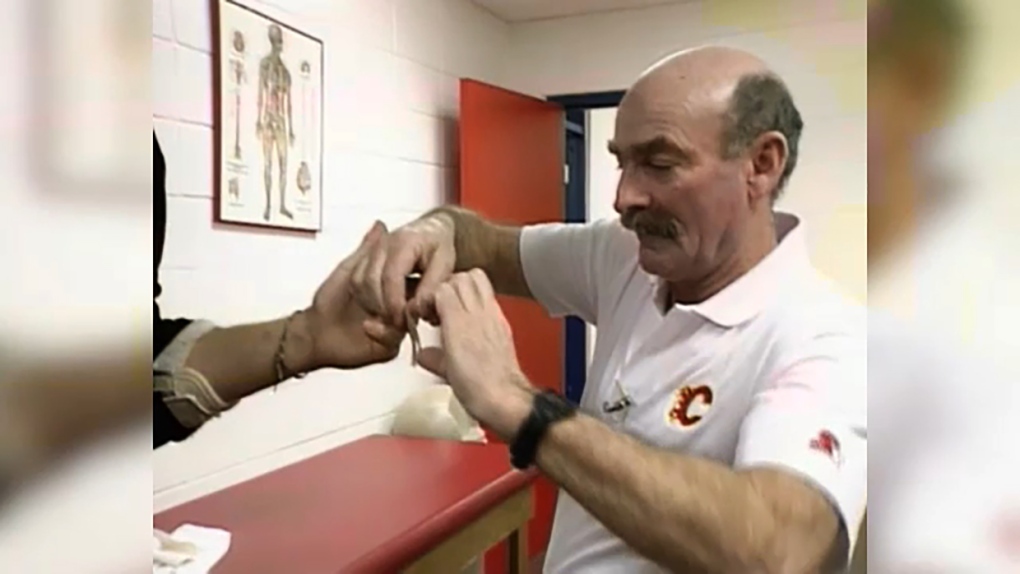 TREATED EVERYONE THE SAME

Former Flames Colin Patterson and  Lanny MacDonald visited the Murray family three weeks ago and were glad they did.

Patterson said one of the best qualities of Murray is he didn't play any favourites in the locker room.   He treated everyone the same.

"He cared deeply about his players.  It didn't matter if you were a great player or just a rookie coming in, he looked after you and made sure you were looked after," Patterson said.

"You know if you were having a tough time playing or sitting out he was the guy who came to you and talked to you.  It wasn't the coaches, you know they would abandon you," he laughed.

"Bearcat is the guy who would come and sit with you and make sure you were okay."

Jim 'Bearcat' Murray was beloved by all that knew him, leaving a lasting legacy of kindness and humility.

Legendary voice of the Flames Peter Maher first met Murray when the Flames came to Calgary in 1980.

Maher said the legend of "Bearcat" continued after his training career.  He did so much work as an ambassador with the Flames.

"I mean he'd been doing all kinds of great things in retirement and even before retirement.

"Playing in charity golf tournaments.  I mean I thought I played in a lot, he played in three times as many as I did through the 1980s and 1990s and into this millennium as well.

"Absolutely an outstanding person who's going to be greatly missed in our community."

COULDN'T SAY NO TO A CHARITY EVENT

Murray helped out in many communities around Calgary as well.  High River Mayor Craig Snodgrass said Murray touched a lot of lives.

"He did a ton of charity work around our area.  He was always there to lend a hand and be part of any charity event that he was asked to do," Snodgrass said.

"He was an icon and he was always there for everybody in our region so that's a big loss."

No word yet on when Murray's funeral will be held.