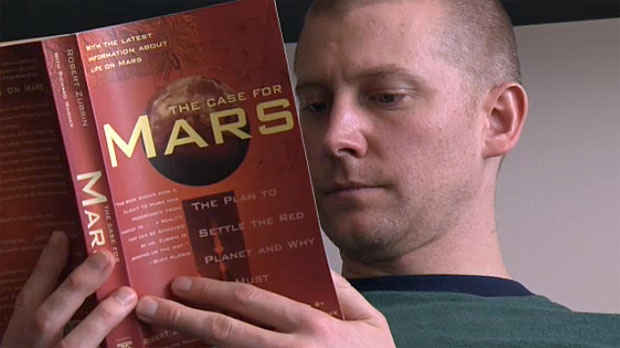 Zac Trolley is excited to be chosen in the second round and hopes to contribute his skills to the settlement.

A Calgary man has reached the next round of selections for a planned one-way ticket to space to set up a human colony on Mars.

Mars One, a non-profit organization based in the Netherlands, is looking to establish a permanent human settlement on the red planet and had a worldwide applicant pool of more than 200,000 eager space travellers to choose from.

About 8,243 applications were from Canadians and the organization whittled down the candidates at the end of December to just 1,058.

Zac Trolley, 31, is one step closer to the possibility of being among the first humans to ever set foot on Mars.

He is an engineer and has always had an interest in space travel.

“It comes down to the willingness to learn, the willingness to see adversity and overcome it, and keep that huge mission in mind and see it all the way to the end,” said Trolley. “I think the most important thing that they saw in my application is that I’m serious about it. A lot of questions come up, would you really be willing to go, is it something you’re really interested in? Yes. Yes it is. I’m willing to go, my family backs me up and I’m really excited to do that.”

The plan is for a crew of four to depart every two years starting in 2024, with the first group arriving in 2025.

Trolley says he has not met any of the other applicants but says the pool contains a diverse group of people who have certain skills.

“Mars, if something goes wrong, it's six months. So there’s no emergency evac, there's no help coming, it's you and your team, the tools that you brought and the environment you're in and how best to use it, and that's what you have and that’s what you need to survive,” said Trolley.

Canada had the second largest number selected after the United States, where 297 candidates were chosen.

Candidates now have until mid-March to provide a health certificate from a doctor and regional selections will be made during a third round later this year.

(With files from Kevin Fleming and ctvnews.ca)