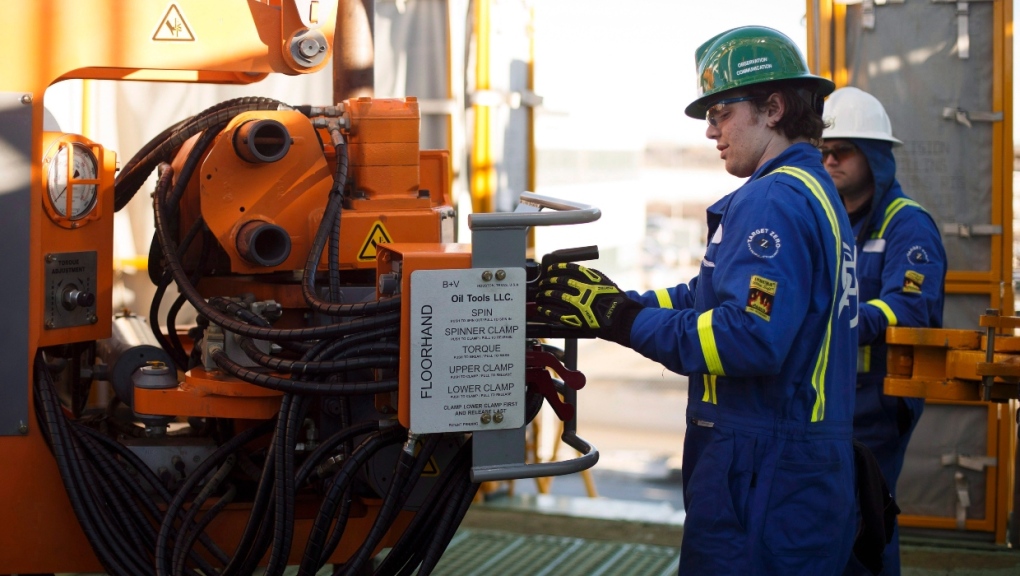 Blake Bernert ,left, learns from instructor instructor Clint Dyck during a training session to lay down drill pipe on a rig floor at Precision Drilling in Nisku, Alta., on Friday, January 20, 2016. (THE CANADIAN PRESS/Jason Franson)
CALGARY -

Precision Drilling Corp. says it lost $38 million in its latest quarter as drilling ramped up and revenue rose more than 50 per cent compared with a year ago.

Revenue totalled $253.8 million in the company's third quarter, up from $164.8 million a year earlier.

Precision, which is the largest drilling rig contractor in the country, says on average it had 51 active drilling rigs in Canada in the quarter, up from 18 in the same quarter last year.

In the U.S., the company had on average 41 active drilling rigs in the quarter, up from 21 a year earlier, while its international drilling business averaged six rigs, the same as a year ago.

In its outlook, Precision says that at current commodity prices it expects higher demand for its services and improved fleet utilization as customers look to maintain and replenish production levels.

"We believe current industry fundamentals are providing the most promising backdrop for our business that we have experienced in almost a decade,'' Precision CEO Kevin Neveu said in a statement.

"Strong oil and natural gas prices, a significantly improved Canadian market structure and rapidly declining drilled but uncompleted well inventories all point to higher drilling activity in our core markets. Although we are likely in the early innings, our firm bookings and current customer inquiries indicate substantially stronger demand for our services and improved fleet utilization as this rebound continues."

This report by The Canadian Press was first published Oct. 21, 2021.