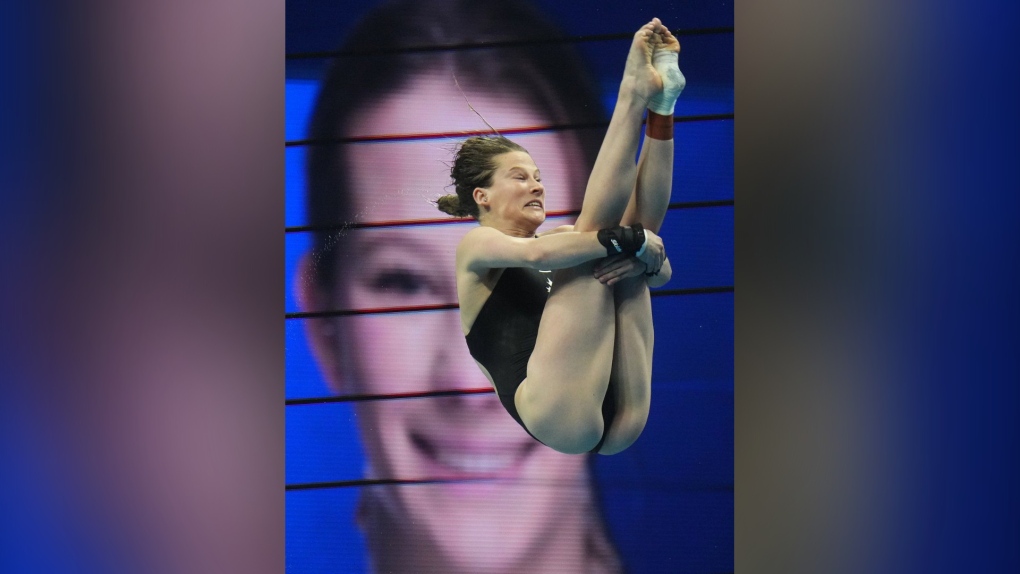 Caeli McKay from Canada competes during the women's diving 10m platform semifinal at the 19th FINA World Championships in Budapest, Hungary, Sunday, June 26, 2022. McKay continued her comeback from a serious ankle injury with a fifth-place finish in the women's 10-metre platform Monday at the world aquatics championships. (THE CANADIAN PRESS/AP-Petr David Josek)
BUDAPEST -

Canadian diver Caeli McKay continued her comeback from a serious ankle injury with a fifth-place finish in the women's 10-metre platform Monday at the world aquatics championships.

The 23-year-old from Calgary was third after the semifinal and fourth going into the last dive of the final, but ended up 20.4 points off the podium with a final score of 318.45 points.

"I’m happy with my result," McKay said. "I obviously wanted to win a medal but my body still isn’t 100 per cent right now and I struggled with my entries."

McKay badly tore ligaments in her left ankle when she caught her foot between a mat and a box she was jumping from while dryland training at Olympic trials a year ago.

She still competed at the Tokyo Games, combining with Meaghan Benfeito to finish fourth in the women's 10-metre synchronized, less than a point off the podium.

"It’s pretty special that this happens exactly one year after my accident," McKay said. "It’s truly amazing to be back at this level today."

McKay made her first appearance in international competition since last summer's Olympics. She opted not to compete in the FINA Grand Prix earlier this month in Calgary after finishing second in nationals in May.

This report by The Canadian Press was first published June 27, 2022.