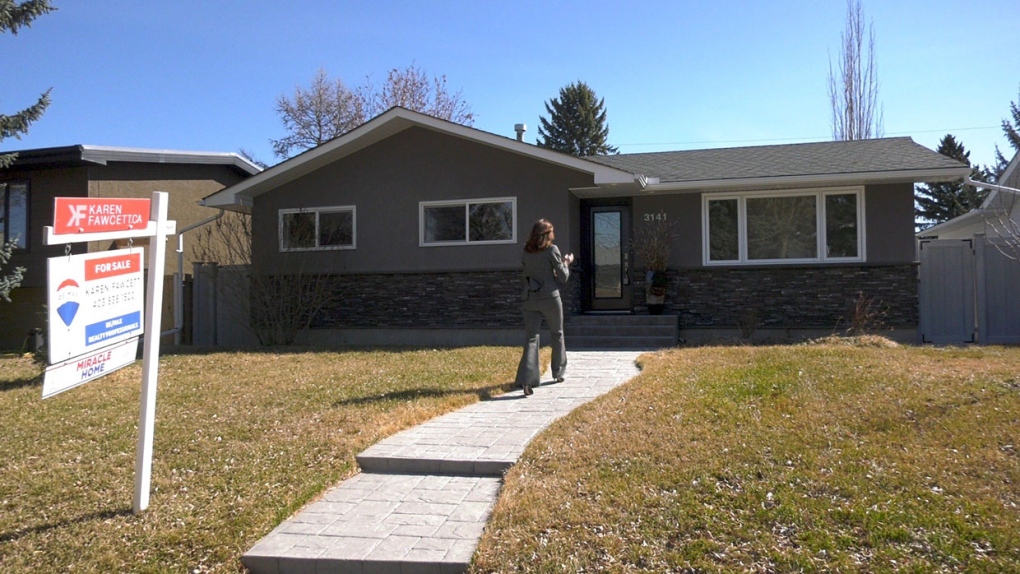 A Calgary realtor outside a listing in the southwest Calgary community of Lakeview,

The Calgary Real Estate Board (CREB) says while home sales in the second quarter of the year were almost as strong as in the months prior, inventories are relatively low and supply is tight.

CREB released its latest quarterly update on Tuesday, in which the organization examined housing sales in April, May and June.

However, new listings were down 3.25 per cent in the second quarter and inventory dropped by more than 20 per cent year over year.

"The lending rate increases have started to impact home sales and are expected to weigh on sales over the second half of the year, offsetting some of the strong gains reported over the first half of the year," CREB noted.

"With market conditions easing and a higher cost of borrowing, prices are expected to trend down in the second half of the year, offsetting some of the stronger than expected gains in the first half of the year . Despite the pullbacks, we anticipate that the annual benchmark price will remain higher than levels reported last year."

Not every home is benefiting from the hot housing market.

CREB recorded 4,949 sales of detached homes in the second quarter, a decline of more than 14 per cent year over year.

Meanwhile, 791 semi-detached homes were sold in Q2, a three per cent decline year over year.

Row housing in Calgary saw an increase in sales of more than 36 per cent year over year, with 1,713 in Q2.

CREB recorded 1,850 apartment condominium sales in the second quarter, and increase of more than 46 per cent.

Serveral areas around Calgary saw a boost in housing sales.

The decline in Strathmore has been contributed to low supply levels in houses, with conditions "continuing to favour the seller," while Cochrane had inventories that remained well below levels traditionally seen in the market.

For Chestermere, CREB was optimistic about their market, saying that "the move towards more balanced conditions is relieving some of the upward pressure in home prices which peaked in May of this year."

As for the jurisdictions that had positive growth, Airdrie’s increase in housing sales was contributed to higher inventory levels, while High River had it where a rise in new listings relative to sales supported some quarterly gains. Finally, the gain in houses sold in Okotoks was thanks to a "gain in new listings."

Poilievre denounces Diagolon 'losers', asks RCMP to look into threat against his wife

Prime Minister Justin Trudeau says he will be visiting the regions in Atlantic Canada impacted by Fiona 'as soon as possible this week.' And, as MPs head back into the House of Commons for the first time after this weekend's storm, the NDP are requesting an emergency debate to discuss 'the urgent and escalating situation in Atlantic Canada.'

The grandmother of an Indigenous teenager whose body was found near a group home in Hamilton told an inquest into his death Monday that his story is not over.