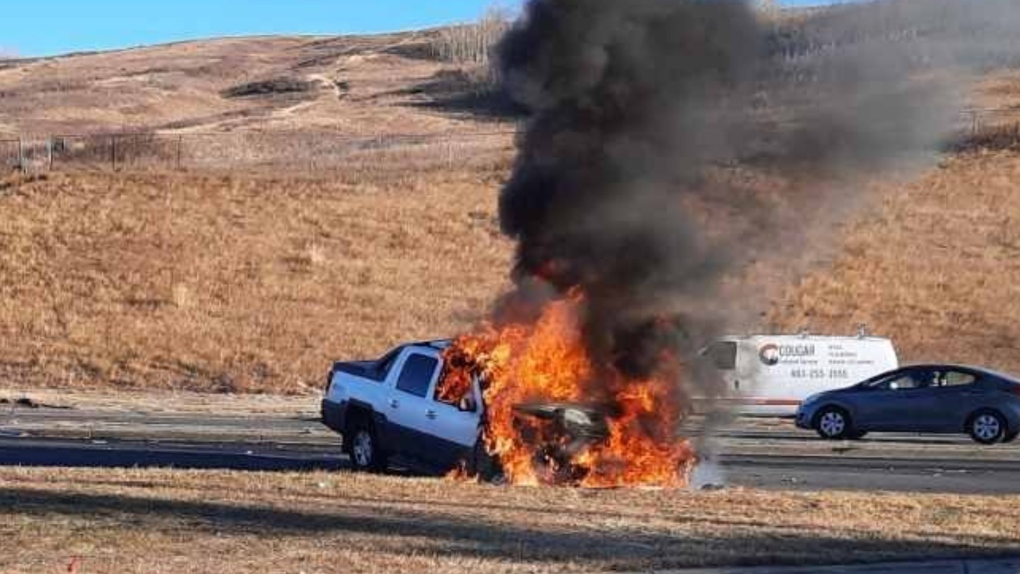 A truck engulfed in flames following a crash at the intersection of John Laurie Blvd. and Charleswood Dr. N.W. (image: Lori Santink)
CALGARY -

The City of Calgary says it is looking at installing traffic signals at three intersections along John Laurie Boulevard N.W. to improve safety.

The intersections are located at Brisebois Drive, Charleswood Drive and 19th Street N.W.

Santink and her husband Nic moved into a house on Charleswood Drivew N.W. in July. They regularly hear horns honking and screeching tires just north of their home.

"Definitely something has to be done, it's an accident waiting to happen."

On Nov. 17, the couple saw the aftermath of a crash where a pickup truck caught fire closing John Laurie for some time. Four days later another collision.

"This time fortunately no vehicles caught on fire," she said. "But it looked to be a multiple vehicle collision as well, again traffic being diverted, again a number of emergency vehicles being called out."

Santink reached out to her area councillor Sean Chu.

"His basic response was that they've put up the infrastructure to look at putting in lights at a later date, no further conversation with him," said Santink.

A spokesperson with the Brentwood Community Association says "In non-peak traffic times most residents try to avoid turning left (at those intersections) and will use Shaganappi Trail instead. Right hand turns have been made safer by the new improved paving as well as longer entrance ramps off Brisebois."

While it may seem like there are many crashes at those uncontrolled intersections, Calgary Police Service officials say those locations didn’t crack their list of the top 20 locations with the most collisions in 2020.

Pat Grisak, the coordinator of traffic management with the City of Calgary, says all three spots need to be changed.

"Over the past several years, the number of collisions that have occurred at all three intersections has increased," Grisak said.

"Traffic safety is a paramount concern for The City of Calgary, and the three intersections on John Laurie Boulevard N.W. require traffic signals to address the collision issues that are occurring along the corridor."

The criteria the city uses to determine if traffic signals are needed at an intersection include an analysis of traffic volumes, traffic operations/intersection delay and safety performance.

"An analysis to determine what the impacts on John Laurie Boulevard N.W. traffic will be with all three intersections signalized has been undertaken," Grisak said. "Traffic signals will have an impact, however, it is anticipated that traffic operations will remain acceptable."

Grisak says the city will be holding public engagement sessions on the matter. Though dates have yet to be set, he says they're likely to happen in early or mid 2022.