CALGARY -- More than two years after the body of a baby was found lying in a northwest Calgary parking lot, police have made an arrest in the case.

Investigators say Nina Albright, 21, the mother of the deceased infant, has been charged with causing an indignity to a human body and failing to provide the necessaries of life.

They said a resident had called them when they discovered the body of a newborn baby girl.

An autopsy determined the child was born about 24 hours before she was left there and had been alive when she was abandoned.

There were no signs of trauma found on the girl's body, police say.

Two months after the discovery, investigators released an image of a woman believed to resemble the mother of the baby girl, dubbed 'Babe Eve' by first responders, using a process called 'DNA phenotyping.'

Police say it was the first time they used the method, which involved extracting the mother's DNA from evidence found at the scene, during an investigation.

It allowed them to create a fairly accurate picture of what the person looked like in order to generate tips from the public that could help with the investigation. 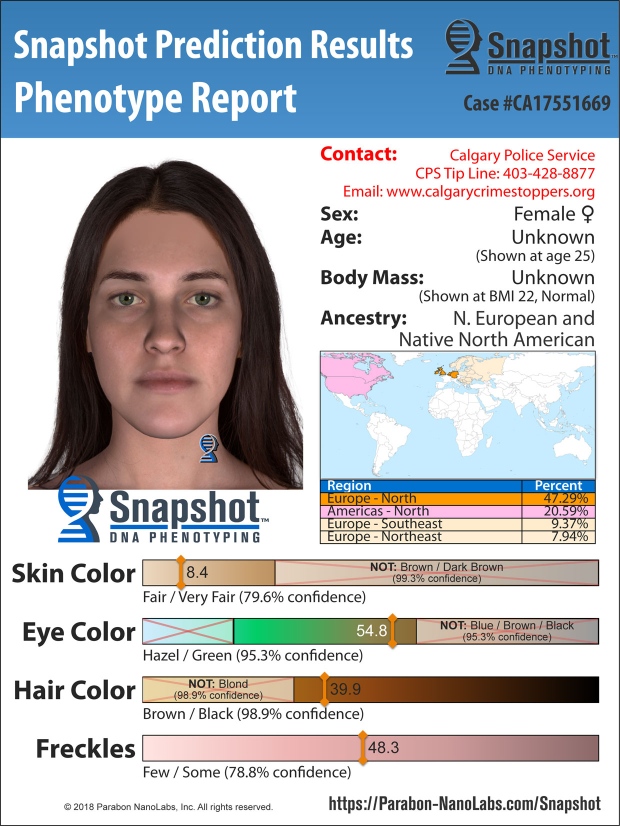 Officials said Thursday approximately 70 tips were received from the public during the course of the investigation and a combination of CCTV evidence and confirmation of DNA from 'Baby Eve' and her mother led police to proceed with charges.

Staff Sgt. Martin Schiavetta says each one of the tips were followed through but it was the physical evidence that led police to charge Albright.

"We thoroughly exhausted all of those tips, however the tips from the public, although they are appreciated, did not lead to the identity of the mother," he says.

"It was old-fashioned policing," he said. "We went through hundreds of hours of CCTV and eventually we were able to find a female who would be in medical distress and also purchasing items -- which I can't get into -- which would be consistent after child birth."

There is the possibility that the Crown could upgrade the charges against Albright or anyone else directly involved in the incident, Schiavetta says.

"We are certainly in consultation with the Crown prosecutor's office."

The father of the deceased infant has not been identified so far, but Schiavetta says police are eliminating individuals one-by-one by analysing their DNA.

He adds DNA phenotyping has become a much stronger tool in the CPS' arsenal over the past few years.

"It's well used throughout North America."

Schiavetta says he would like anyone who is in a similar situation as this young woman to reach out to any number of community resources available through Alberta Health Services or other organizations for help.

"This is a case that weighed heavily on the minds and hearts of not only investigators but the larger community. While particulars surrounding motive and intent will unfold as part of the court process, we hope this provides some level of closure for all involved."

Albright is due in court on February 21.