AFTERNOON UPDATE: Well, this cloud sure did stick it out! Calgray runs a storm risk through 5-7 p.m., but otherwise we're keeping that activity off to the south.

Thursday's activity remains of note and interest. A trough is forming and driving up toward southern Alberta, which will be the progenitor for widespread storms, many of which could be severe. Hail is the main threat, and in some places, it may be considered a significant event (greater than two cm in diameter). Funnel clouds are also possible in some areas once this spins up. This will be a line from extreme southwestern Alberta across K-Country.

Because this trough spins up over the course of the day, it creates the same-old challenge with activity crossing the Rockies; when do we see the worst of it? A few models show this striking up early in the afternoon, but the majority have settled with dinner hour storms.

3:36 P.M. Update... Environment Canada has submitted this updated convective outlook.... including the note of tornado potential in a corridor from Edmonton right to the border along Highway 2. I noted earlier a "greater than two cm" hail diameter, and EnvCan has adjusted with three to six cm hail.

Six centimetres is slightly larger than a billiard ball!

Tomorrow (July 7) looks to be an active day along and east of the foothills, including the QEII corridor.

It's a good time to prepare your summer emergency kit if you haven't done so already.

MORNING EDITION: Yesterday's storms are something of a prelude for more inclement weather today. By the late afternoon, we could watch storms press by and, though many of these will be non-severe, there is plenty of runway for activity to mature further off the foothills. Most of today's inclement weather rolls south of Calgary, developing along the Highway 22 corridor and keeping an eastward trajectory.

Otherwise, Calgary looks at a similar start from Tuesday; sunny weather to kick the day off, with building cloud and then, that afternoon storm risk.

Tomorrow, too, is shaping to be a stormy one. Widespread thundershower development is already making the rounds, with a wind-up between mid-and-late afternoon. Severe potential will carry forward, with Calgary looking at moderate-to-high instability.

Friday maintains the course – warm, dry conditions will be an excellent lead-in for the Stampede Parade. I'm keeping an eye on Saturday now – while we're in great standing for stability now, there are signs of uneven footing… it's sunny for now, but that may change to thundershower potential for Saturday afternoon as we close in.

Our weather pic of the day was sent by Tracy of a fogbow; it's also known as a white rainbow! 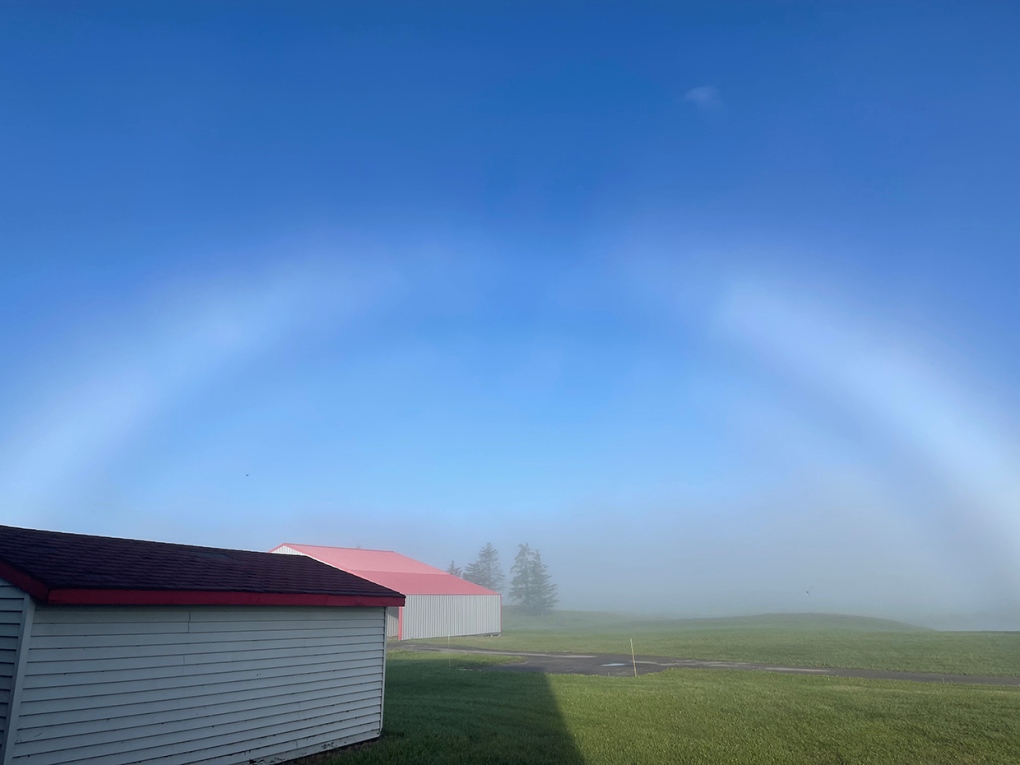 Viewer Tracy's photo of a fogbow.