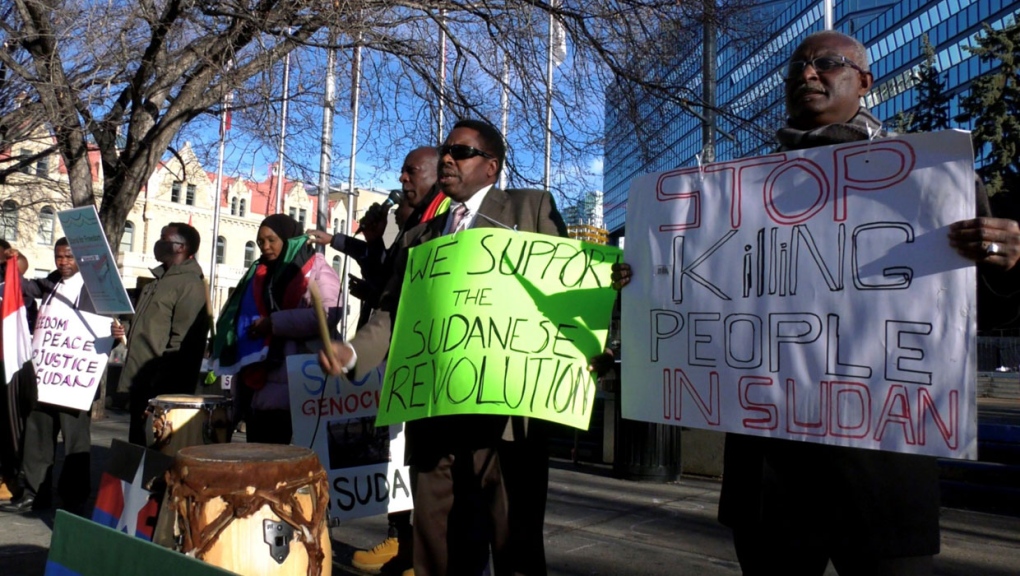 The Sudanese community spoke out against violence back home and urged the Canadian government to do more.
CALGARY -

Calgary’s Sudanese community gathered Sunday afternoon to participate in a vigil and condemn the massacres committed against its people following yet another act of violence in the north African nation.

An Oct. 25 military coup in the country, led by General Abdel Fattah al-Burhan of the Sudanese Armed Forces and the Rapid Forces of General Mohamad Hamdan Dagallo is continuing to unfold.

The recent Jebel Moon massacre in the West Darfur state killed another 24 people Saturday according to Acting Governor of the region, Mohammad Issa Aliyu.

That brings the death toll to 376, including another 762 people wounded and the rape of more than 13 girls and 78 women.

As a result, Sudanese Canadians remain distraught at the widespread images of violence, unwarranted arrests and torture of civilian leaders including Sudan’s Prime Minister Abdallah Hamdok and a number of cabinet ministers.

Hamdok has since been freed from effective house arrest and reinstated, after signing a deal with Burhan that was viewed by critics as “whitewashing” the coup.

Ameera Abbo is from Darfur and attended Sunday’s demonstration in Calgary.

She says the recent violence reminds her of what happened in Sudan back in 2003 when Dafur was ravaged by a civil war, which pitted ethnic minority rebels complaining of discrimination against the Arab-dominated government.

More than 300,000 people died and 2.5 million people were displaced according to the United Nations and Abbo worries that could happen again.

“The history is repeating itself, it’s a disaster what’s happening in Sudan, from the government to the military coup that took place a month ago, the chaos, and now the genocide is still happening,” she said.

“I am overwhelmed for what’s happening right now, we are asking the Canadian government now to intervene in peace negotiations in Sudan especially considering the situation in Darfur, it never stops.”

Others attending the protest on Sunday like Ageeb Hassaballa agrees that its important to convey the message to the Canadian government that help is needed.

“It’s very sad and whenever I start talking about the situation going and the killing going on even of peaceful protesters, children, women, the elderly, they don’t differentiate and the violence continues,” Hassaballa said.

“It’s a genocide, it’s the mass killing, it’s the raping, it’s unbelievable and we have to do something to help them because we are here as their voices and we need to be voices for the voiceless.”