CALGARY — Each year tens of millions of songbirds migrate over Alberta on their way to warmer places, but not all make the journey safely, with many flying into buildings, injuring or killing themselves in the process.

Since the beginning of Septemeber, a group of nearly 40 volunteers from the Calgary Migratory Species Response Team has been patrolling a downtown circuit, gathering data on where birds are colliding with buildings.

The migration has now tapered off significantly but the group has collected over 100 birds and bats, with less than two dozen of those able to be rehabilitated and sent back into the wild.

“They design the city to make it very aesthetically pleasing to us, but lights like this that we have here, can cause problems for birds and bats,” said Dr. Scott Lovell, an ornithologist and assistant professor of biology at St Mary’s University and a program volunteer.

“They get disoriented by the colours of the lights and actually slam into it and they can get injured or actually killed.” 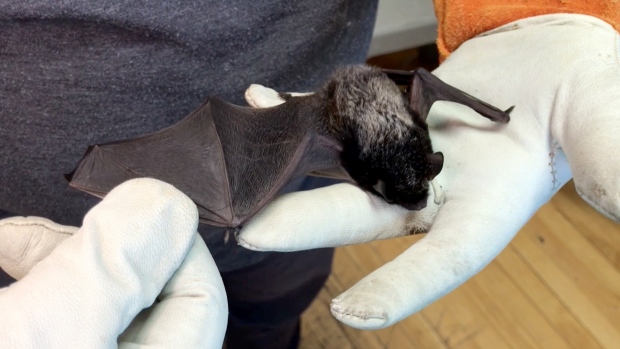 The last time a similar survey was done in Calgary was way back in 1997, says Lovell, and the city has changed considerably since then.

“We want to get a baseline and really to see, is this a problem in Calgary or not?” he said.

The group was started by Kathleen Johnson, who says she started reading about building strikes by birds and wondered how significant the hazard was here. When she discovered no one was tracking the mortalities, she put feelers out to the local bird community.

“Now we have just under 40 volunteers that are out doing this only months later and reviewing and surveying the city to see what we find,” says Johnson.

The program has also recovered several bats and passed them along to the Calgary Wildlife Rehabilitation Society, where they are warmed and fed until they grow strong enough to continue on their flight south.

Bats are threatened in much of North America, largely because of white nose syndrome, a highly contagious fungus that has wiped out entire populations in some places.

The Migratory Species Response team is mostly done its surveys for this year, but plans to continue their work in 2020.

It’s estimated about 1 billion songbirds are killed in building strikes in North America each year, while domestic cats kill an additional 3 billion.