'Can we hook him up?': Turkey on the loose in Calgary wandering in search of mate 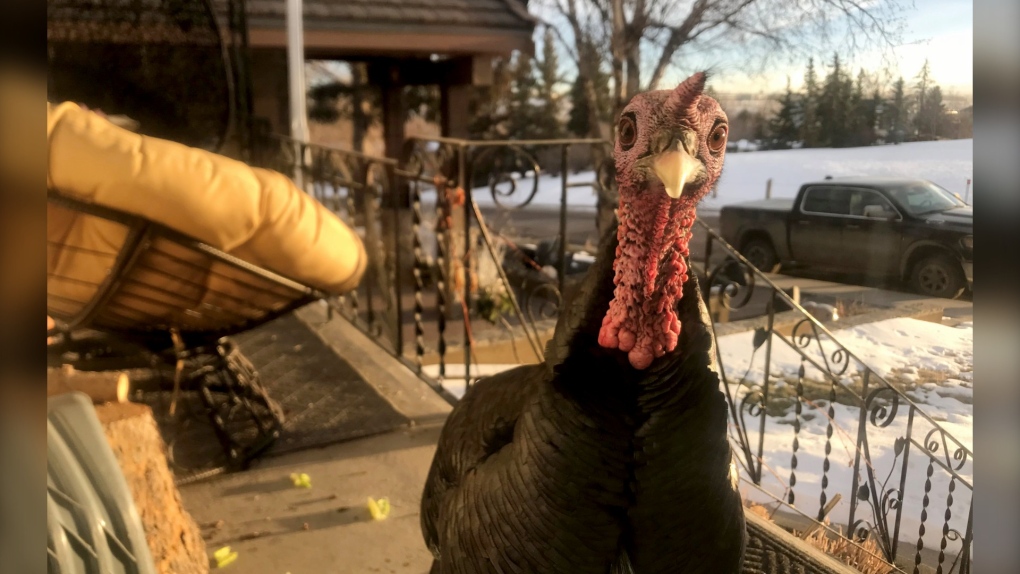 Turk Diggler is looking for love, and one Calgary city councillor is wondering whether to play matchmaker. Sightings of the lone male turkey with brown and grey feathers and a red wattle began about a year ago in Calgary's Ramsay neighbourhood southeast of downtown. (Christa White/The Canadian Press)

CALGARY -- Turk Diggler is looking for love, and one Calgary city councillor is wondering whether to play matchmaker.

Sightings of the lone male turkey with brown and grey feathers and a red wattle began about a year ago in Calgary's Ramsay neighbourhood southeast of downtown.

Residents theorize the bird escaped from an agricultural event at the Stampede Grounds down the hill.

Until recently, Turk seemed content to stick around Ramsay.

Turk has a nearly 3,800-strong Facebook fan club on the “Loyal Followers of the Ramsay Turkey” page, and members have been posting photos of his travels around town over the past two weeks.

He has shown up in Carra's neighbourhood of Inglewood, right next to Ramsay. Police Const. Chris Martin was also out on patrol two weeks ago and snapped photos of the bird meandering around the Beltline area.

This week, the turkey was peering at windows of the Eau Claire YMCA.

“What seems apparent is that Turk Diggler is looking for a mate, because he seems very pre-occupied with staring lovingly at his own reflection in any surface that reflects him — a window or a sheet of plate steel,” Carra said.

“I'm absolutely convinced that mine is not the only household where Turk Diggler becomes a topic of delighted dinner time conversation. And I think everyone would be very interested in the next chapter of Turk Digger's life if it involved a happy family.”

Carra is wondering: “Can we hook him up? Can we get him a girlfriend?”

He said he plans to reach out to Alberta Fish and Wildlife to ask whether that makes sense.

The department said in a statement that officers respond to public safety concerns involving wildlife, which does not apply to Turk.

Why it's so friendly

Keating said Turk is a wild turkey that seems to have been hand-raised.

“I'm amazed that it has survived over the winter just because the city's a dangerous place for an animal that tastes as good as a turkey to be wandering around.”

Keating said spring is when a turkey's hormones begin to kick in.

“This is the breeding season and Turk is looking for a girl,” he said. “The juvenile delinquent in me says, 'Yeah, let's get him a girl.”'

He said it should be possible to procure a female turkey from a breeder in Alberta.

And Turk has a lot going for him as a potential suitor.

“His plumage is glistening with all kinds of iridescent colours. His wattle is excellent — it's a beautiful red colour,” said Keating.

If he were wooing a female, Keating said Turk would put on quite a show.

“He would spread his tail. He would strut in front of her. He would give all kinds of gobbles.”

The deed itself would be done in just a moment.

But Keating questions whether it's ethical to bring another bird into the mix. It's a surprise that Turk has survived this long, and he's not sure a mate or offspring would be as lucky.

“Are you just condemning a bird to death?”

Letting the season go by without a mate is no big deal for Turk, said Keating.

“He'll just live another year and he'll do it all again next year, looking for a girl.

“I think we should just enjoy Turk for who he is and what he is.”

This report by The Canadian Press was first published on April 17, 2020