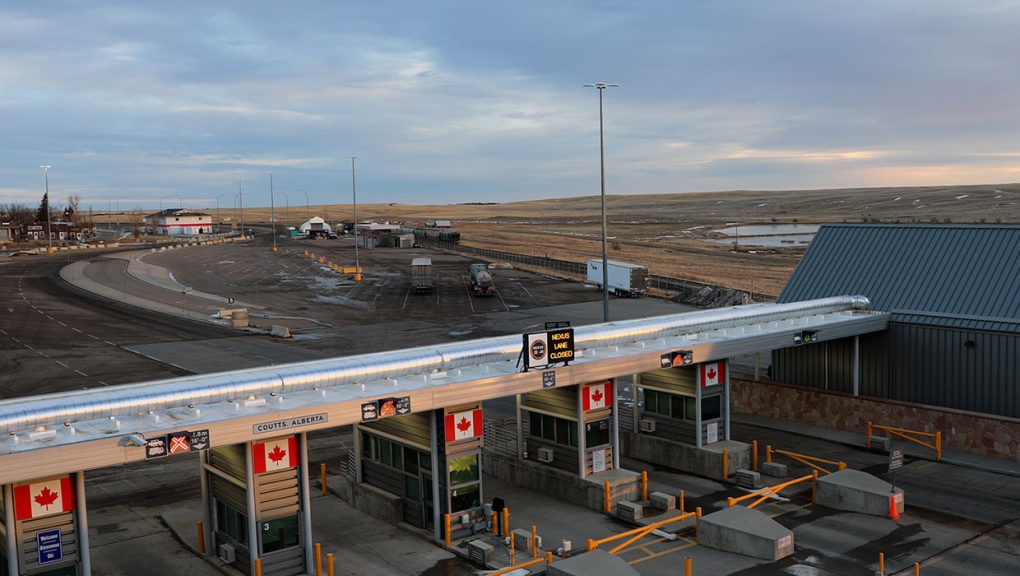 The border crossing at Coutts is one of the busiest land crossings in the province of Alberta. (Supplied)

The Victoria Day long weekend is right around the corner and the Canada Border Services Agency says all travellers must use a mobile app, which gives agents access to all their travel and health information, to return to Canada.

For more than two years, travel at land crossings has been down across Canada and it is the same story at Alberta's busiest land crossing in Coutts, Alta.

However, with many restrictions lifted, officials say they expect a lot more travellers to cross this summer.

"We are gearing up for a busier summer season," Scott Kienlen, the CBSA's corporate chief for southern Saskatchewan and southern Alberta district, told CTV News in an interview Thursday.

"When we're looking back to pre-COVID or 2019 levels, our current traffic volumes are, on average, about 25 to 30 per cent less."

He says commercial traffic has remained fairly strong; between seven and 10 per cent over pre-pandemic figures.

Nevertheless, anyone crossing into the U.S. should know there are different requirements when they return.

"Travellers this year will notice that the border this year is managed a little bit differently," Keinlen said.

One of those differences will be the ArriveCan app, a program that was created during the pandemic to help Canadians collect all their documentation, including travel info and vaccination proof, in one location.

The CBSA says travellers, no matter their vaccination status, must use the app to return to Canada. Keinlen adds anyone who has the app loaded and ready will have an easier time coming home.

"That will reduce your wait time when you are coming through," he said. "It's a free mobile app that you can access on their website. The information can be submitted up to 72 hours prior to the return to Canada."

Anyone without a smartphone is also able to access ArriveCan, but will need to print out a copy of their receipt once they submitted all of their information.

While having all personal details at the ready is most important, Keinlen says it is also important to understand that you need to document everything you purchase south of the border and intend to bring home.

"It's a good thing to know your exemptions to be prepared and not be surprised," he said. "Residents can bring back, duty and tax free, goods valued at $200 after being absent for 24 hours. After 48 hours that dollar amount actually increases up to $800."

There are some items that travellers should not bring home, Keinlen said, and some of those are because of rules in place to restrict the spread of avian flu.

"Currently, travellers are not able to bring back any raw poultry products from states that are infected with avian flu and this includes the state of Montana, so I would shy away from purchasing or bringing any of those products back because they will not be allowed entry into Canada."

While it is legal in Canada, Keinlen says travellers should not cross the border with any cannabis products unless they have a proper permit from Health Canada.

"Don't bring it in and don't take it out," he said. "Transporting cannabis across the border in any form including oils or actual products remains a serious criminal offence."

Further tips and details on what you can and can't bring back to Canada can be found on the CBSA's website.