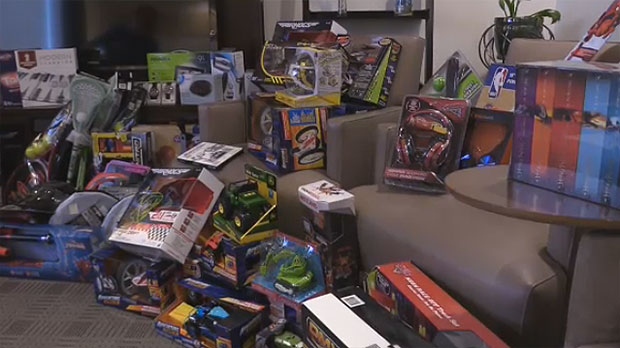 Toys from the Grant a Gift project fill a room at Hospice Calgary and will be given to children who have lost a loved one.

The family of a man who passed away unexpectedly four months ago has launched a gift giving campaign to ensure children who have lost a loved one have something special under the tree this holiday season.

Derek Grant passed away in July leaving behind a wife and three young children.

His family says he was a proud husband and father and they have partnered with Hospice Calgary and the Sage Centre to create a project, called “Grant a Gift”, in honour of his memory.

“I figured what better way to give back in his memory than to run a toy drive,” said Derek’s brother Ryan. “I think that anytime that you lose a parent or anybody close to you, you don’t really know how to react so for my nephews and young nieces, this is just another way of brightening up somebody’s day. Anytime somebody passes away it’s tough on a family so anything we can do to put a smile on somebody’s face is what we’re here to do.”

“For many families, once a parent dies, they’re financial situation changes as well as the emotional toll and all of that grief on the family and on the children,” said Nadine Gariepy-Fisk, from Hospice Calgary. “In the current climate in Calgary, many families don’t have the money to have the same kind of Christmas they may have had before and so this makes a huge difference for them.”

The Grant family has been collecting cash and toys for children who are served by the two agencies and says the response from Calgarians has been overwhelming.

“The community has been fantastic, so supportive,” said Ryan. “At the end of the day it goes to a good spot, kids that have lost parents in the last year and give them something extra under the tree.”

This year the campaign raised over $5200 in cash donations and about $2000 worth of donated toys.

The family hopes to form a foundation so they can carry on the gift giving next year.