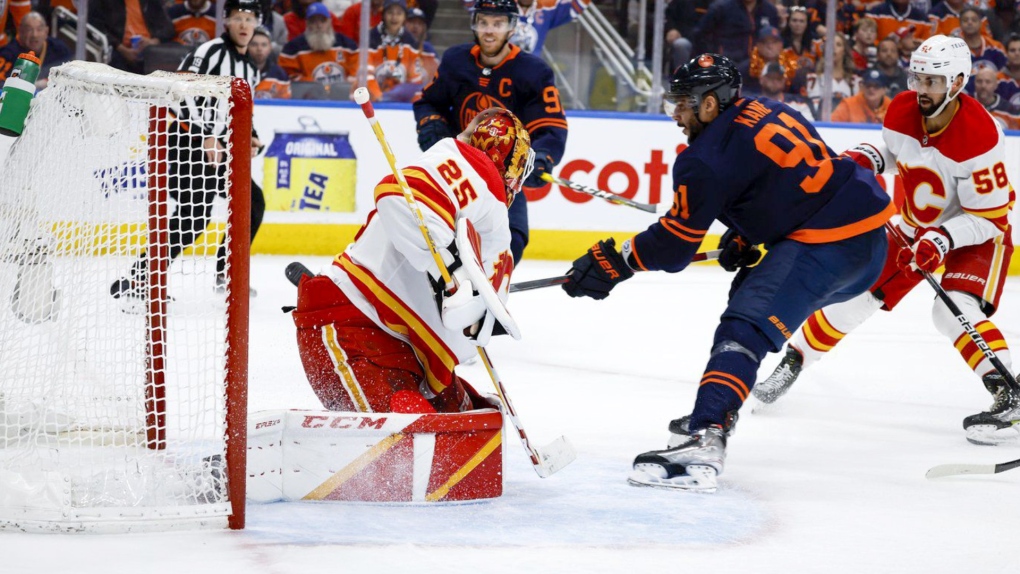 If the Calgary Flames thought their second-round series was going to be a cakewalk after scoring nine goals in the opening game, they forgot the firepower of their opponent.

Evander Kane had a natural hat trick in the second period, Leon Draisaitl had four assists and Connor McDavid had three helpers to put him at 23 points in just 10 games, as the Edmonton Oilers cruised to a 4-1 win Sunday to take a 2-1 lead in the Battle of Alberta series after losing the first game 9-6.

Flames defender Rasmus Andersson felt is was easily his team’s worst effort of the series.

“Yeah, probably. For sure that second period, at least,” he said. “You’re never happy when you play like that and you lose the second period 4-0. We left (goalie Jacob Markstrom) out to dry there one too many times.”

McDavid became the first player in NHL history to record nine multi-point games in the first 10 games of the playoffs and has been a constant thorn in the Flames’ side to this point.

“He had another, what, three or four-point night?” Andersson said. “He played really well today and we just have to find a way to stop him together.”

It certainly wasn't just McDavid, as Draisaitl set an NHL playoff record as well, becoming the first player to ever record four assists in one period.

“They haven’t played at home in this round yet and they were going to come out hard and really play with a lot of purpose in their game, a lot of speed, and they did,” Flames head coach Darryl Sutter said.

The Flames can take solace that they were also down 2-1 in their opening-round series against the Dallas Stars and came back to win in seven games.

“They have home-ice advantage right now. We've got to win one game here to get it back,” said Flames forward Matthew Tkachuk. “We could've lost 10-0 tonight. We could've lost 1-0 in overtime. It's the same result. We were in this position last series. It's not that hard of a recipe to figure out here. We've just got to win one game and get the series tied and go back home.”

“That’s the beauty of the playoffs, I guess — it’s a new game in a day-and-a-half and we’re excited for that,” Andersson added. “Now we flip the page, we move on.”

This report by The Canadian Press was first published May 22, 2022