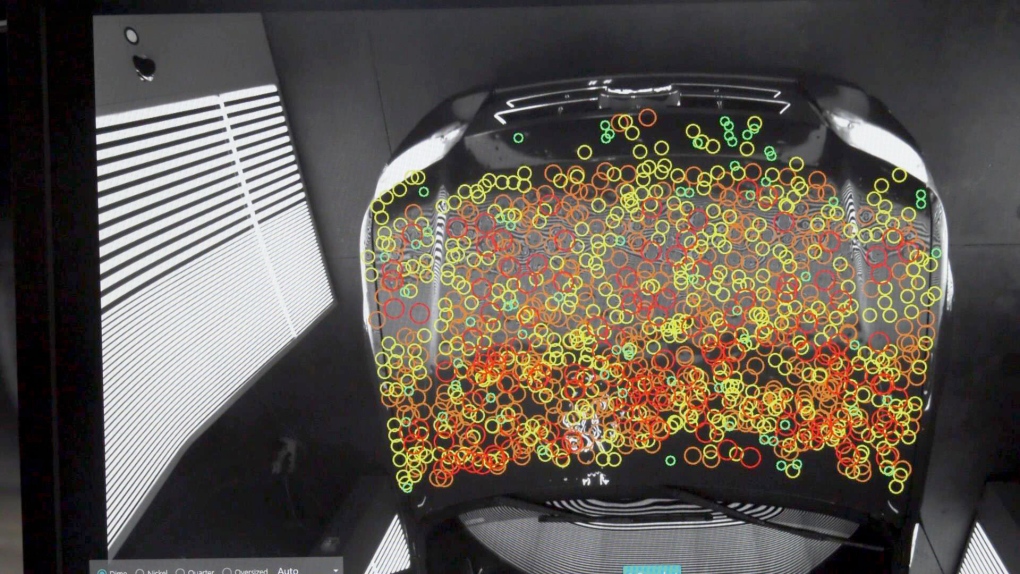 A scanner image showing hail damage. Green is for the smallest dents and red for the largest.

CALGARY -- The massive hailstorm that pounded Calgary earlier this month has backed up insurance adjusters as they scramble to review the thousands of vehicles damaged in the storm.

One Calgary company, DCC Hail, has a high-tech solution speeding up the process.

The company is using a hail scanner which reduces the sometimes hours-long ordeal of counting and marking every dent into a matter of minutes.

“We have the ability to drive a car through the scanner, (it) takes about six seconds to actually scan the vehicle and another couple of minutes to analyze what it saw, and it spits out a complete dent count and dent map of every dent on your vehicle,” said Devon Fenton.

“We don't have to go around the car and count every dent to make sure we find every one. It does that for us.”

The scanner uses five cameras to scan a vehicle from multiple angles at once, then an AI program stitches it together, giving operators a clear map of every dent -- and its size.

“This is an accurate estimate. We've caught all the damage on the vehicle," said Fenton. “You know that when you bring your car in for repairs, every part of your vehicle is going to get repaired properly. And back to pre-storm condition.”

But some vehicles might never be restored to pre-storm condition.

The parking lot behind DCC Hail is jammed with close to 200 cars, trucks and SUVs which have been deemed “total losses” by insurers. The term refers to what’s commonly called “a writeoff."

“It is super sad. We've had customers come in where they've only had the car for a few days,” said Fenton. We had a customer who bought their SUV  Monday before the storm, it had 600 kilometers on it. And now it's not the same, it's a total loss."

The storm has sparked a boom in the auto-body repair business, with shops swamped with work and looking for staff.

DCC Hail has brought in staff from across Canada to handle the crush of hail-damaged vehicles. It expects work scanning vehicles to continue through July, and repairs to still be happening up into the end of the year.

DCC Hail has eight of the proprietary Hail Damage Scanners, seven of which can be packed up and shipped to wherever hailstorms hit. The eighth remains in Calgary, as southern Alberta is home to the greatest number of damaging hailstorms in Canada.