'It should have been fixed a long, long time ago': Couple recounts Calgary Tower elevator failure weeks before cables snapped 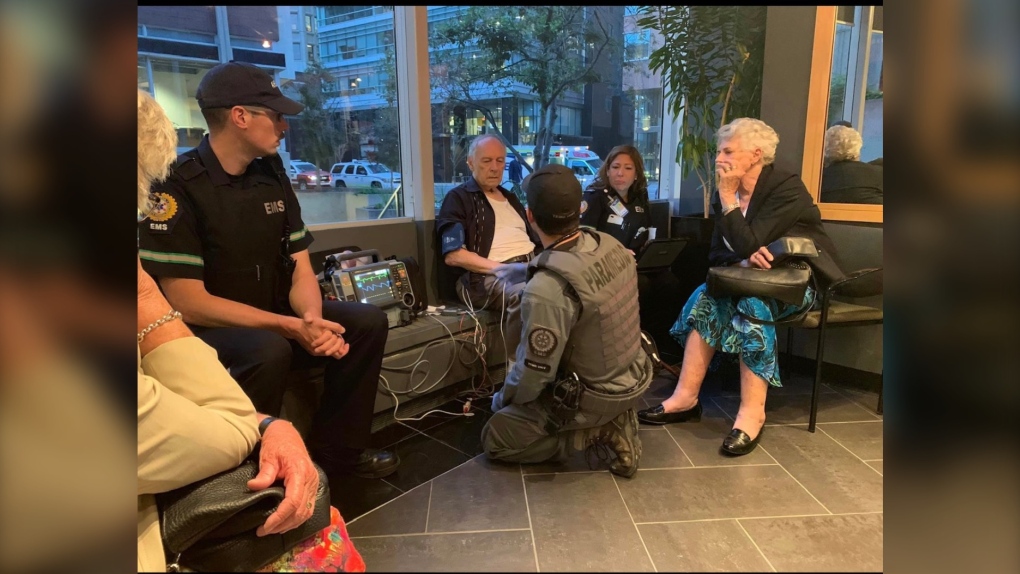 Paramedics tend to Guenther after he descended the 802 steps down the tower when the elevators broke down on June 18. (Sophie and Guenther Haegele)

An elderly Calgary couple is recounting a stressful experience at the Calgary Tower due to elevator problems and say it happened more than three weeks before eight people were sent plummeting several floors because of snapped cables.

On June 18, Sophie and Guenther Haegele were dining at the Sky 360 restaurant atop the tower with their granddaughter and Sophie's sister from Germany.

When it was time to descend, they learned the elevators were not in operation and staff had no idea when they would be repaired. After waiting more than an hour, the two 83-year-olds decided to climb down the 802 stairs.

"I have an ankle that needs surgery and my sister has problems with her knees," she said. "So it was a hard decision to make."

Their granddaughter went down first after staff told them there were firefighters on their way up the stairs with equipment to assist them. But firefighters did not arrive until Sophie and Guenther made it all the way to street level and they say tower staff offered no assistance.

By then, Guenther needed medical attention.

"They [firefighters] saw that my husband was in distress so they called EMS and they looked after him," said Sophie.

According to a preliminary investigation, two of six cables on a tower elevator snapped on July 12 and eight people who were trapped inside had to be rescued by the fire department's high-angle rescue team.

When the Haegeles heard about that incident, they were shocked.

"It should have been fixed a long, long time ago," said Guenther. "I blame the management or whoever’s in charge of the tower."

When the Haegeles arrived at the tower on June 18, one elevator was already out of service.

In an email to CTV News, Adam Hicks, communications manager for the Calgary Tower, said no further comment will be provided because the investigation is ongoing.

"The device will remain out of service until any repairs are made and the device can safely return to service," said AEDARSA VP of Operations Dean McKernon in an emailed statement.

Sophie Haegele says she won't be going back to the tower anytime soon because of the harrowing experience, but her husband says they like to take visitors from Europe there to proudly show off the view.

"It should have been looked after a long time ago before something happens drastically," he said.