When it came to heptathlon, Jessica Zelinka was one of the finest female athletes in the world.

Zelinka placed fourth at the 2008 summer Olympic games in Beijing, China and followed that up with a fifth place finish at the London summer games in 2012. 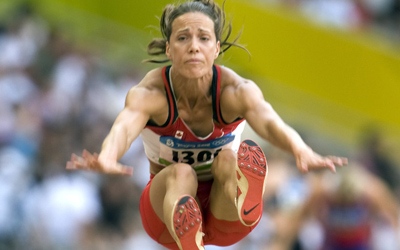 Jessica Zelinka, from London, Ontario, competes in the long jump event of the women's heptathlon at the 2008 Summer Olympics in Beijing, Saturday, August 16, 2008. (Ryan Remiorz / THE CANADIAN PRESS)

(Zelinka competing in the long jump at the women's heptathlon in the 2008 Olympics in Beijing Photo: Ryan Remiorz/Canadian Press)

She is also one of the most decorated athletes in University of Calgary history.

So it made perfect sense that Zelinka would go for the head coaching job for the track and field and cross country teams when it became available in 2021.

Zelinka had been coaching since her retirement in 2016 but she says despite her credentials and experience, she wasn't sure she was ready.

"I just thought you know that someone older or more experienced than me in coaching should be applying," Zelinka said.

"I just don't have the years under my belt as a coach.  I was a coach for five years and did my masters program as well but I was looking to maybe start my own program somewhere and get that experience and that mentorship until I was ready."

It took some convincing and finally the 40-year-old decided to apply.  Turns out she was exactly what the Dinos were looking for and she was hired.

Assistant coach James Holder has known Zelinka since 1998 when they were both competing.

He says she makes a great head coach.

"She provides a lot of different things in terms of motivation," Holder told CTV.

"The kids really look up to her as an athlete knowing what she's gone through.  Understanding or trying to understand what she's lived through as an athlete on the international scene.  She's really good at explaining stuff at an athlete's level."

Zelinka is a pioneer at the U of C, she is the first woman to coach a men's team.  Fifth year student Kai Spierenburg is on the track and field team and he says Zelinka definitely deserves to be leading the team.

"Honestly (it's) just really inspiring to have an Olympian with so many credentials as an athlete and also a coach," he said.

"She literally just deserves to be there as a female or just as a coach in general.  She deserves everything she has gotten here with being the head coach."

BRINGING A LOT TO THE TABLE

First year student Luke Swadling agrees.  He says Zelinka has a lot of great ideas that has helped the track team.

"I think Jessica is well qualified to coach us and she brings a lot to the table with the university athletics."

Zelinka will no doubt pave the way for other women who may find themselves in the same position she was.

And her advice is if a job comes up? Go for it.

The next scheduled event for the Dinos track and field/cross country teams is next weekend in Edmonton when the University of Alberta hosts the Panda Challenge.