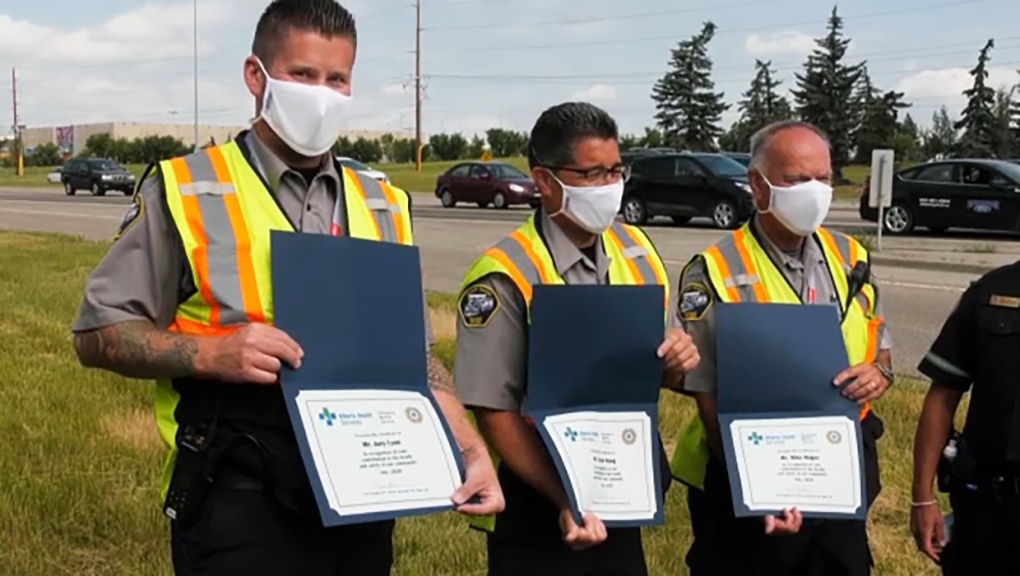 Three LRT training officers were recognized for their efforts saving a motorist in medical distress.

CALGARY -- On Wednesday three Calgary Transit LRT training officers came to the rescue assisting a driver who appeared to be passed out at the wheel.

The three men were returning from an LRT training exercise when they came across the motorist in medical distress.

29 year LRT Training Officer veteran David Wong was able to reach inside the driver’s window to put the vehicle in park.

“The adrenaline was going, it seemed like an eternity it really did," said Wong. "It was a well-oiled machine - all you're doing is just reacting to the situation the City of Calgary provided us with a skill to have the first aid training and all we did was put that skill into use and we are just glad we could assist."

The driver had no pulse and appeared to be in his late sixties.

One officer called 911 immediately while the other two officers performed CPR until paramedics arrived and took over.

“We have all done CPR with the city but to see it actually kick in and work, I’ve never done it, I’ve been here 33 years, so it works it was really cool,” said LRT Training Officer Mike Magee.

Friday the three transit officers were recognized by Adam Loria, an Emergency Medical Services (EMS ) Public Education Officer for their quick action and presented with an awards package.

“They do deserve some sort of recognition that they did a great job and that’s why they fall under our Citizen Award Recognition Program,” said Loria. “It was very commendable, showing great courage. What these three gentlemen did and provided to our patient and what our paramedics were able to put forth their care on the road to hospital definitely gave this gentleman the possible chance for survival,”

The man is in serious condition in the hospital.