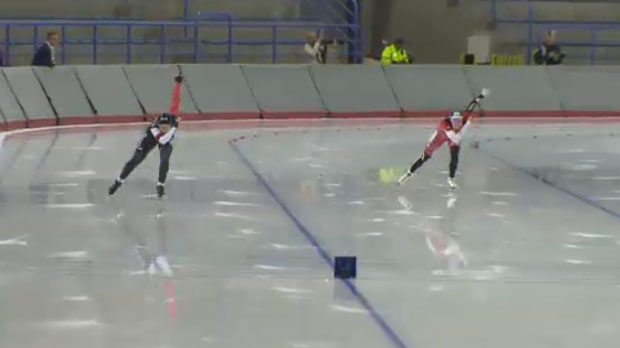 There won't be skating at the Olympic Oval in Calgary until at least January due to ongoing mechanical issues. (File photo)

CALGARY -- Ongoing mechanical issues first identified last month means there won’t be any skating at the Olympic Oval in Calgary before January, officials announced on Thursday.

The problem was first identified in early September, said director Peter McCrory, and because they are dependent on a single supplier for the fix, it will likely be late January before repairs can be completed and the ice re-installed.

“As much as we would like to see that timeline shortened … that’s what they’re conveying to us,” he said.

No competitions were scheduled before then due to the ongoing COVID-19 pandemic, but the loss of ice will have a big impact on athletes, especially members of Canada’s long track speed skating team who train at the oval.

“In a pre-Olympic year this is less than ideal,” said McCrory. “We’ve been working since early September … extremely closely with Speed Skating Canada, the local community clubs, the university clubs and any other third party that would typically come into the oval to use the ice facilities and we’ve accommodated where we can and facilitated opportunities for them to get replacement ice. Unfortunately there is only one long track speed skating track in Calgary.”

Built in 1987 ahead of Calgary’s Winter Olympics, McCrory says the building is in need of a “significant capital investment.”

“It’s a building that wasn’t designed to last that long but tribute to the team here keeping it going as well as they have over the years,” he said. “One of the things we’d like to see at some point in time is a significant capital investment into the building to be able to attain world-class services for another 33 years, that’s something we’re actively pursuing.”

Work done on Calgary’s bid for the 2026 Games last year showed the oval could use about $55 million in upgrades.

While there will be no ice until January, McCrory says dryland training is able to continue.