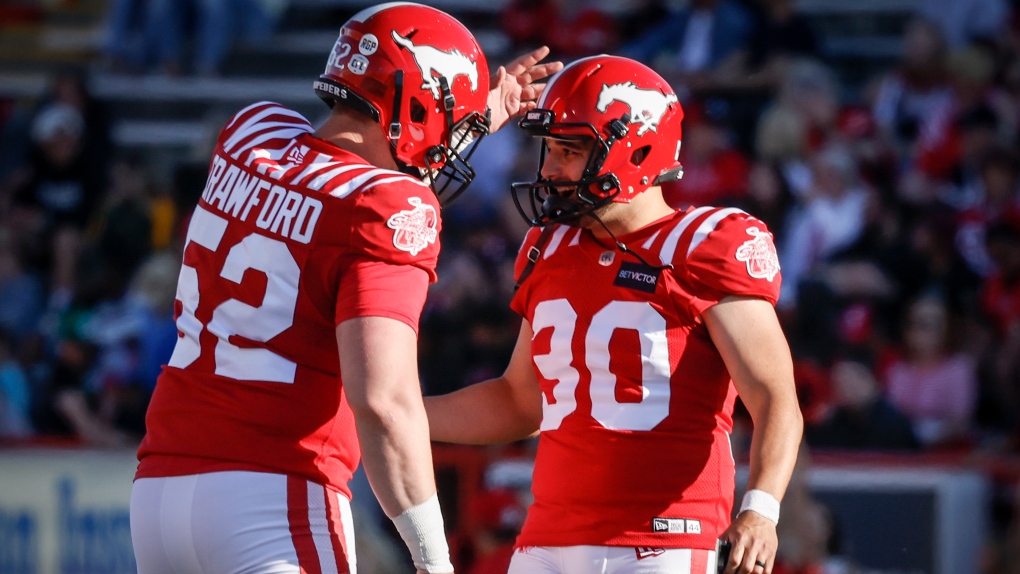 Quarterback Bo Levi Mitchell threw for 321 yards and Malik Henry scored a third-quarter, go-ahead touchdown for the Calgary Stampeders in a 30-23 win over the visiting Edmonton Elks on Saturday.

Ka'Deem Carey and Tommy Stevens scored rushing touchdowns in addition to Henry's touchdown catch for Calgary (3-0) in front of an announced 22,739 at McMahon Stadium.

Henry compiled 173 receiving yards on six catches in the game.

Calgary's Rene Paredes kicked field goals from 46, 28 and 35 yards and added three points in converts in the first of four meetings this season between the CFL's Alberta clubs.

Calgary and Edmonton haven't played four games against each other in a single season since 2012.

Kai Locksley scored a short-yardage rushing touchdown and Emmanuel Arceneaux had a touchdown catch for Edmonton (0-3).

Sergio Castillo kicked a pair of 46-yard field goals and another from 47 yards. Matt Mengel scored a 60-yard punt single.

Mitchell, who was a game-time decision because of a sore foot that limited his reps in practice this week, completed 21 of 28 passing attempts with one touchdown pass in his 150th career CFL start.

In his first start against the team that gave him his start in the league, Elks quarterback Nick Arbuckle was 20-for-31 in passing for 225 yards and one touchdown throw. He was intercepted once.

Arbuckle spent his first two seasons with the Stampeders in 2018 and 2019. He went 4-3 in the latter season when Mitchell was injured.

The Stampeders trailed at halftime for a third straight game, but down three points was the smallest deficit of the three.

Calgary led 20-17 by the end of the third quarter on Mitchell's 28-yard touchdown throw to Henry and a Paredes convert in the last minute.

Paredes padded the Stampeders' lead to 23-17 with a 35-yard field goal to start the fourth quarter, but Castillo responded with a 46-yarder to keep the Elks in the hunt for the win.

Stevens, Calgary's third-string quarterback behind Mitchell and Jake Maier, scored his first CFL touchdown on a one-yard effort with two minutes remaining in the game, after Edmonton's defence denied Stevens from the same distance on the previous play.

The Elks trailed by a converted touchdown following Castillo's 47-yard field goal with 33 seconds to play in the game. Edmonton's attempt to recover an onside kick was foiled by Kamar Jorden grabbing the ball first.

Paredes' 26-yard field goal pulled Calgary within a point after Mengel's punt single to start the third quarter, but Castillo later extended Edmonton's lead to 17-13 with his first from 46 yards.

Stampeder linebacker Cameron Judge picked off an Arbuckle pass intended for Kenny Lawler to put the ball on the 38-yard line with less than a minute remaining in the quarter.

Mitchell threw to Henry on the next play and the receiver sprinted to plant his foot in the end zone's corner to score.

In addition to Judge's pick, the Stampeders also got defensive contributions in the third quarter from Shawn Lemon with a pair of sacks and a pass knockdown.

The Elks led 13-3 with two minutes remaining in the first half on Arceneaux's 33-yard catch and run to the end zone, and a Castillo convert.

But Calgary quickly countered with a six-play drive highlighted by Mitchell's throws of 24 and 37 yards to Reggie Begelton.

Carey capped the march with a three-yard dash to the end zone for the hosts to trail by a field goal at halftime.

Stampeder head coach Dave Dickenson was denied his challenge for pass interference on a Mitchell throw to Henry early in the second quarter. Paredes then halved a six-point deficit with a 46-yard field goal.

Edmonton's Deon Lacey knocked the ball out of Henry's hands for Thomas Costigan to recover on the Elks' 52-yard line midway through the opening quarter. The visitors didn't convert the turnover into points, however.

Dionte Ruffin's pass interference penalty on Arbuckle's throw to Lawler in the end zone put the Elks on the one-yard line during their opening drive of the game. Locksley scored on the short-yardage plunge for a 6-0 visitors lead.

The Stampeders head into a bye week while the Elks are in Hamilton on Friday to face the Tiger-Cats.

This report by The Canadian Press was first published June 25, 2022.