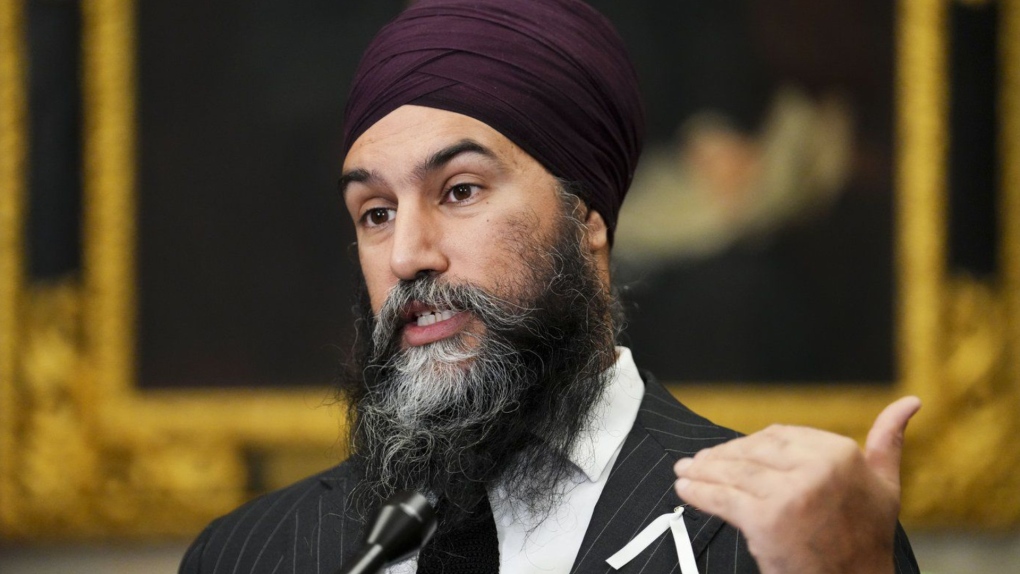 Federal NDP Leader Jagmeet Singh speaks to reporters at the House of Commons on Parliament Hill in Ottawa, on Nov. 30, 2022. THE CANADIAN PRESS/Sean Kilpatrick

Federal NDP Leader Jagmeet Singh says Alberta's proposed sovereignty act is undemocratic and an unwelcome distraction from the struggles residents of the province are facing.

After a meeting Friday with union leaders in Calgary, Singh took aim at the bill Premier Danielle Smith introduced on Tuesday.

Smith has described it as a deliberately confrontational tool to reset the relationship with a federal government she accuses of interfering in constitutionally protected areas of provincial responsibility, from energy development to health care.

But Singh said that at a time when Albertans are suffering from record high inflation and an overloaded health care system, the proposed legislation makes no sense.

"I think it is a bit of a distraction at a time when we're seeing unprecedented record inflation, at a time when people are having a hard time buying groceries and people are using food banks more than ever," Singh told reporters Friday.

"At a time like that, Danielle Smith chooses to bring in this act. It really shows a lot of heartlessness."

Smith has rejected accusations that the bill amounts to a power grab.

“Every decision that is going to be made has to first get the validation from this assembly,” she told the legislature earlier this week.

If a resolution passes in the house identifying a federal matter deemed unconstitutional or harmful to Alberta, the bill grants cabinet powers to unilaterally rewrite provincial laws without sending them back to the legislature for debate or approval. Cabinet would be allowed to direct public agencies, including police, municipalities, school boards, post-secondary institutions and health regions, to flout federal laws.

It would also give cabinet wide latitude on how to interpret the resolution it receives from the assembly. It says cabinet should follow the direction of the house, but doesn't mandate it. Instead, cabinet is told to exercise its new extraordinary powers however it deems "necessary or advisable.''

"It's dangerous and it's undemocratic, and there was no mandate for this," Singh said.

Kaycee Madu, Alberta's deputy premier, has said amendments may be needed to clear up confusion over some aspects of the proposed legislation.

However, Singh said the bill "shows a callous behaviour" by the governing United Conservative Party.

"I think it is intended to be a distraction from the real problems people are faced with," Singh said.

"The worry I have about Danielle Smith as premier is about people being left behind — and I really mean it."

Last month, the provincial government announced payouts of $600 for middle- to lower-income families to help with the increasing costs of living.

Those with a household income of less than $180,000 a year are to get $600 for each child under 18 over a period of six months. The same income threshold and benefit applies to seniors.

The government also promised to remove its provincial gasoline tax and to continue providing electricity rebates. It has also earmarked $20 million to help food banks.

After a string of violent attacks on public transit in Toronto and other cities, a new survey has found that nearly six in 10 public transit users in Canada say they feel less safe or somewhat less safe while commuting.

A Russian woman says she has been denied consular services by her country's embassy in Canada over claims her Facebook activity poses a security threat.

Provincial and territorial finance ministers to meet in Toronto

Deputy Prime Minister and Finance Minister Chrystia Freeland is hosting an in-person meeting today with the provincial and territorial finance ministers in Toronto.

A new survey conducted by Research Co. reveals that more people in Western Canada now support a change in the federal government compared to a similar poll from June.