Calgary’s Southcentre Mall is showcasing a variety of colourful works from Indigenous artists focusing on their history, culture and heritage.

Colouring It Forward (CIF) Reconciliation Society partnered with the mall for the timely exhibit, which launched in the weeks leading up until the National Day for Truth and Reconciliation.

"The fact that a mall is willing to collaborate with an Indigenous social enterprise is a really good step forward for Truth and Reconciliation," CIF board chair Diana Frost said. "It shows that you can collaborate with a commercial entity and achieve social goals.

"Truth and Reconciliation is something that we all should care about," said Frost. "It's not just an Indigenous problem, when you know a large portion of our population is suffering, we should all care about that."

This year marks Keevin Rider's second being involved with the art installation.

His painting is of a mountain scene similar to where he grew up.

He says he consulted with one of his spiritual adivsors about what animals to include.

"I started with the tatonka – the Buffalo –  and then from there it went out and then the animals appeared like the eagle, the wolf and the bear."

Rider says his culture believes that all things have a spirt and when he gets closer to those spirits it helps him heal.

"My parents were residential so it affected me, it's actually affected my grandchildren," said Rider. "So you know we have our spirit and we always call our spirit back."

Flora Johnson, a sixties scoop survivor, was split up from her brothers who were sent to residential schools.

"I may not be completely healed," said Johnson. "But this is a part of my healing, when I paint, I feel loved, vibrant, I feel it's just my passion." 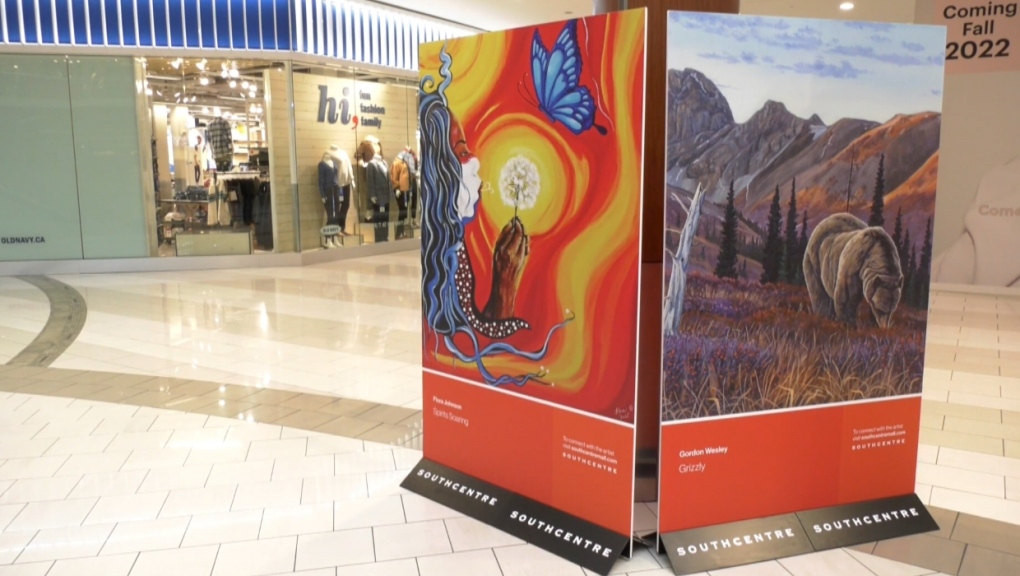 Paintings by eight Calgary Indigenous artists are featured at Southcentre Mall's centre court in honour of Truth and Reconciliation. Kalum Teke Dan's painting style is popular with pieces commissioned all over Calgary, but he says it wasn't always that way.

"30 years ago I couldn't sell very many pieces," he said. "People just didn't understand or didn't want to know, or they wanted us to be pushed into the corner and not thought about or cared about, so we're showing them we're strong, we're resilient, we're powerful, we're here and we're proud."

"I'm seeing more and more people interested in finding out about Truth and Reconciliation and supporting Orange Shirt Day by wearing orange shirts," she said. "It's nice to see people from all walks of life wanting to contribute." 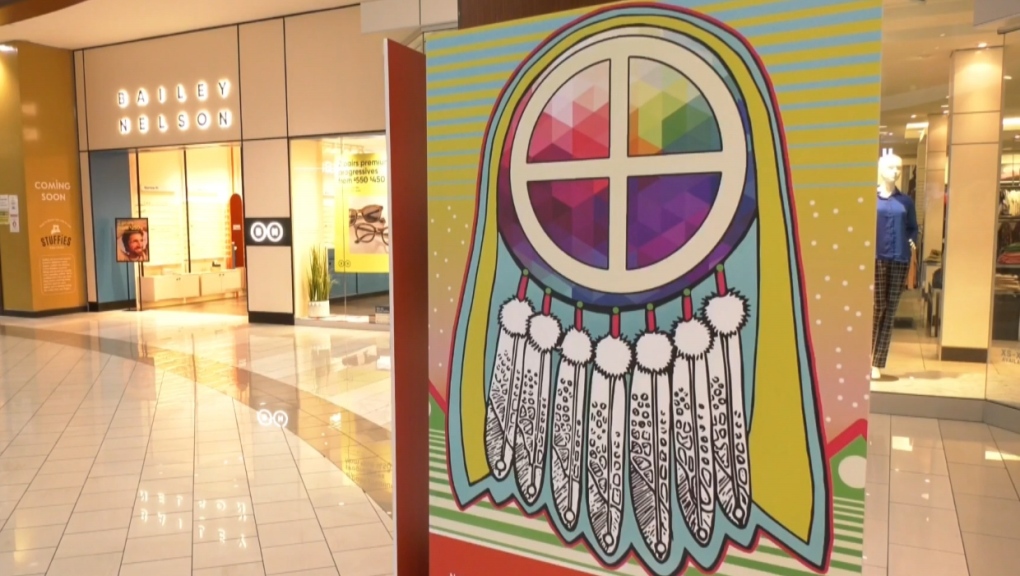 Paintings by eight Calgary Indigenous artists are featured at Southcentre Mall's centre court in honour of Truth and Reconciliation. The works of art are supported by a double-sided activation wall. One side features information about the CIF Reconciliation Society and on the opposite is a canvas for visitors to express their own ideas and visions of reconciliation.

In addition to viewing the art, people can learn about a number of reconciliACTIONS.

Alexandra Velosa is the mall’s marketing manager. She says the actions are practical tips to help foster reconciliation. The signage is placed around the upper balcony on the second level that overlooks centre court and the art installation.

"ReconciliACTION is a key component of our initiative," said Velosa. "As a community connector, we want people to come here and learn about how they can be a part of the reconciliation, how can they make a difference."

To learn more about the Colouring It Forward Reconciliation Society you can visit the organization’s website.