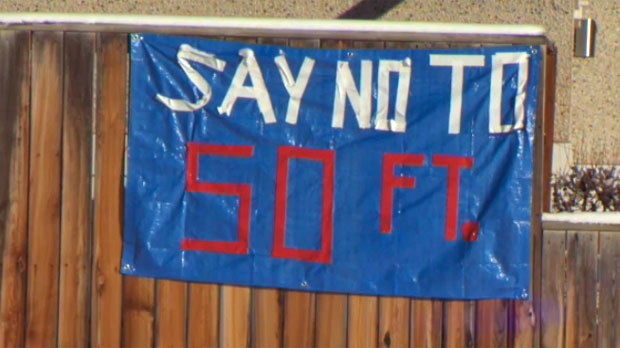 Banners of protest have been placed throughout the northwest community of Brentwood as residents demonstrate their contention with a proposed development that will exceed current zoning restrictions on the height of a building.

The unnamed development will be situated at the northwest corner of Northmount Drive and Brisebois Drive Northwest at the site of a former Esso gas station.

According to NORR Architects Engineers Planners and Lupi Homes, the proposed mixed-use development, consisting of both residential and retail space, will be 50 feet tall (approximately 15 metres) and 24,000 square feet.

Brentwood residents have expressed their concerns with the height of the four storey development and fear the project will increase traffic and parking headaches.

“I have no problem with a responsible development which would be under the current zoning which I think would be a maximum overload on that intersection,” said Ashton Embry.

Embry says traffic tie-ups are common at the 'very busy intersection' during rush hour and he fears for the safety of young pedestrians.

“Many times, especially in the spring and the fall, you see school kids walking from their schools through that intersection going to the school or the library that’s just down the block.”

An open house is scheduled for Wednesday evening in the gymnasium of Brentwood Elementary School (1231 Northmount Drive N.W) from 6:30 – 8:30 p.m. Representatives from Lupi Homes, NORR Architects Engineers Planners, the City of Calgary and the Brentwood Community Association are scheduled to attend.

Bruce McKenzie, NORR Architects Engineers Planners’ vice president of business development, says the concerns of Brentwood residents are not being dismissed but the neighbourhood must be willing to accept that progress is inevitable.

“We want them to understand that we are listening to them,” said McKenzie. “We’ve had several meetings with the community association development committee, we’re holding this open house, there was an open house held at the land use stage

“We would also like to encourage them to accept the fact that communities change and that things can’t just stay the same. It happens to many municipalities all over the world. Densification of inner city neighbourhoods is a common theme nowadays.”

McKenzie says the mixed-use development will benefit the community long term as the proposal places a focus on pedestrian access and walkability while slightly intensifying density.

“That’s the kind of development that the city wants to see and certainly the planning department wants to see. We think it’s a responsible and sustainable way to develop this site.”

The City of Calgary has extended the deadline for accepting public submissions on the proposal until Saturday, November 28.

“The City will ultimately make the decision on whether or not to approve this development.”

Should the City approve the proposal, McKenzie says it will take at least a year for the project to be realized.