Pandemic 'not over for everyone': Alberta's weekly fatality statistics remains high

Pandemic 'not over for everyone': Alberta's weekly fatality statistics remains high

As a Calgary family grieves for a loved one lost to COVID-19, Alberta continues to report a high number of weekly deaths, and public heath restrictions including isolation requirements are lifted.

"My father was a person who would be very much a leader," said Sujata Day, whose father, Vinay died of the virus on March 28 in Montreal.

Her father is remembered as an inspirational figure and committed community advocate.

"My father was a person who wanted to just be of service to people, he wanted to see good things for people," she said.

She said her father became infected in Alberta shortly before travelling to Montreal to assist with her wedding preparations, but he tested positive and was soon hospitalized to be treated for the virus plus a secondary infection.

"At the end, it was just like, everything was just failing, and it was very hard to watch," she said.

The virus continues to claim the lives of many Albertans even as the province advances to Stage 3 of its pandemic recovery plan, lifting all public health measures.

In the last week of March 2022, there were 21 fatalities reported.

Weekly totals steadily climbed to 70 by the first week of May, and have remained above 40 into the month of June.

There were 24 deaths in the latest weekly totals from the Alberta government. 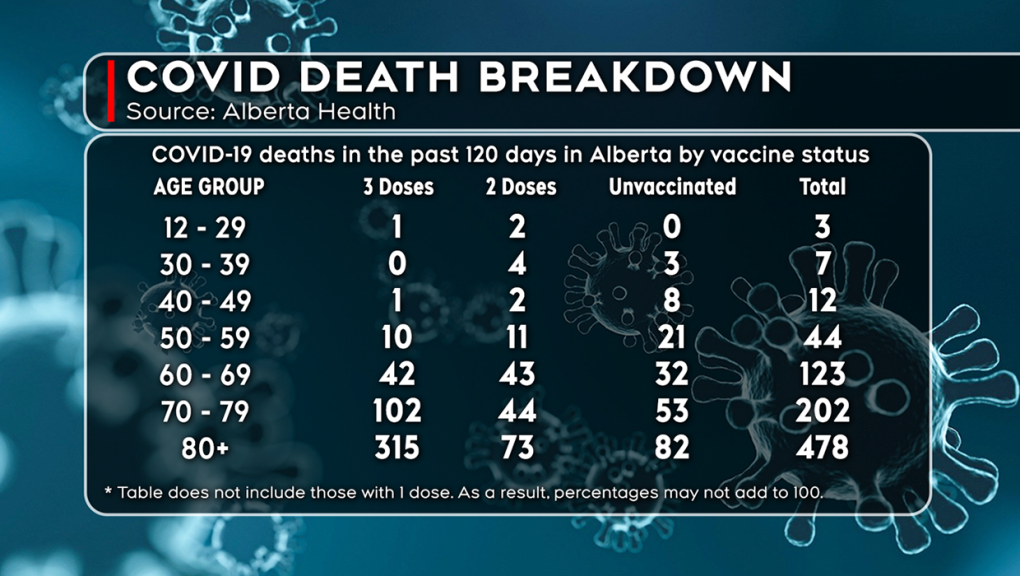 COVID death breakdown, for past 120 days in Alberta

"We are seeing more deaths than we would see for a normal bad influenza year and yet there's this sense that we need to move forward and that the pandemic is over," said Dr. Stephanie Smith, infectious disease expert from University of Alberta.

With widespread vaccine coverage as a majority of Albertan adults have received at least two shots, data from Alberta Health shows the vast majority of those who died with the virus are vaccinated, boosted, over age 70, and died with complex immune compromising conditions as well.

In the past 120 days, a greater number of Albertans age 69 and younger who have not received a booster shot (or any at all) have suffered fatal outcomes.

However for Albertans age 70 and above, there is a higher likelihood that population has had at least three shots, yet age and pre-existing conditions contribute to higher mortality.

With widespread vaccine coverage as a majority of Albertan adults have received at least two shots, data from Alberta Health shows the vast majority of those who died with the virus are vaccinated, boosted, over age 60, and died with complex immune compromising conditions as well.

"Even if they've had four doses of vaccine, they just don't mount as good a response. And it's tragic really, because there's less ability to use those tools to protect themselves," said Smith.

As for the public health response, Smith said pandemic exhaustion has led to a collective "acceptance that we will accept a higher death rate than any of us would've thought possible."

NOT OVER FOR EVERYONE

The Dey family says they don't want their father, or his health circumstances, to be forgotten.

"People have the illusion that it's all over and they are going out and doing things but it's not over for everyone right?" said Sujata Dey,

Hurricane Ian carved a path of destruction across Florida, trapping people in flooded homes, cutting off the only bridge to a barrier island, destroying a historic waterfront pier and knocking out power to 2.5 million people as it dumped rain over a huge area on Thursday.

You may not be anywhere close to ready for the holidays — but retail chains certainly are. Christmas trees are already on sales floors at retailers such as Costco and Lowe's.

NATO said Thursday it would retaliate for any attacks on the critical infrastructure of the 30-member-countries organization as it suggested that damage to two gas pipelines off Denmark and would-be member Sweden in international waters in the Baltic Sea is the result of sabotage.

Kremlin gets ready to annex 4 regions of Ukraine on Friday

Russia on Friday will formally annex parts of Ukraine where separation 'referendums' received approval, the Kremlin's spokesman said, confirming the expectations of Ukrainian and Western officials who have denounced the Moscow-managed votes as illegal, forced and rigged.