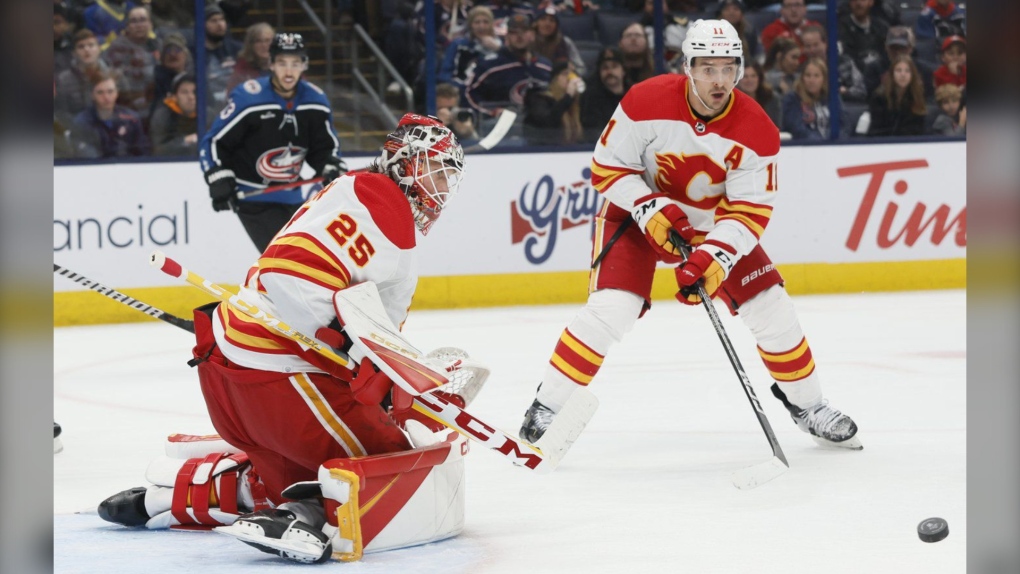 Eric Robinson and Sean Kuraly also scored to help Columbus end a six-game home losing streak. Joonas Korpisalo stopped 12 shots in the first period before suffering a lower-body injury. He was replaced in the second by Elvis Merzlikins, who stopped 21 shots.

“We had a good start and that helped,” Blue Jackets coach Brad Larsen said.

“You get a goal early on, you get one there and take a breath. We had good energy. This was a heck of a game by a lot of guys — a really good effort all the way through.”

Michael Stone scored for Calgary and Jacob Markstrom stopped 23 shots in his first start after sitting out three games. The Flames had won three in a row.

Laine opened the scoring at 1:02 of the first period and Robinson made it 2-0 on a breakaway at 2:52 of the second.

“I could have had four or five tonight," Laine said.

"We were pretty happy with the way the offence was going. All four lines played good offence and defence.”

Playing with an extra skater, Stone cut the lead in half with 2:34 left in the third with a shot from the blue line. Kuraly sealed it, scoring an empty-netter with 24 seconds left.

“I think our defence struggled mightily with the puck and in coverage for the whole game,” Calgary coach Darryl Sutter said.

“Some guys came for a visit, not to try and win the hockey game. Very disappointed.”

Laine’s goal extended his point streak to three games. With his assist on Kuraly’s goal, Boone Jenner has collected points in five of his past six games. Jack Roslovic’s assist on Laine’s goal was his fourth in five games.

Blue Jackets forward Johnny Gaudreau played his first game as an opponent of the Calgary Flames. Gaudreau spent nine years with Calgary, skating in 602 games with 609 points (210-399). Defenceman Erik Gudbranson also came over from the Flames in the off-season, having skated in 78 games with 17 points including six goals and eleven assists, all of which were career bests.

Columbus and Calgary combined for 13 penalties, six for Columbus and seven for Calgary, but were both fruitless on the power play.

The Flames recalled forwards Matthew Phillips and Radim Zohorna from the AHL and assigned Kevin Rooney.

Flames: At Toronto on Saturday night.