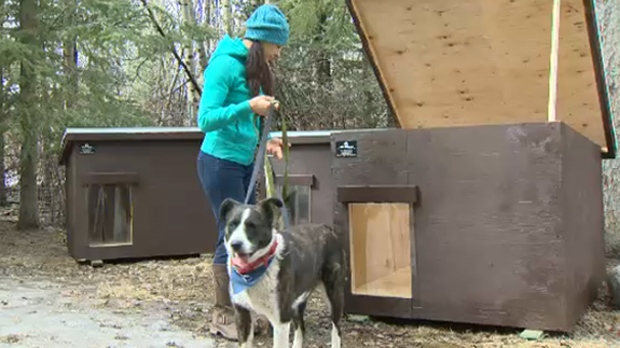 A Canmore based animal rescue organization is attempting to assist pet dogs on the Stoney Nakoda First Nation who are exposed to the elements.

“We rescue out there (near the town of Morley) on a regular basis and see so many owned dogs freezing, it’s not just the homeless ones,” said Rory O’Neill, the founder of Rocky Mountain Animal Rescue. “So we wanted to help the ones that belong to the families because they’re out there suffering too.”

The rescue group is asking people to sponsor the building of doghouses which will be supplied to First Nations families to ensure their pets will not have to sleep outside on the ground.

Rocky Mountain Animal Rescue’s doghouses are built by carpenters and are insulated. The houses have two rooms and are large enough to accommodate multiple dogs.

“This will keep them warm and cozy,” explains O’Neill.

Many of the families on the reservation lost their homes during June’s flooding of the Bow River and are residing in temporary housing where pets are not permitted. The flood has created an increase in the number of dogs sleeping outdoors.

For more information on the doghouse project and the rescue organization, visit Rocky Mountain Animal Rescue.