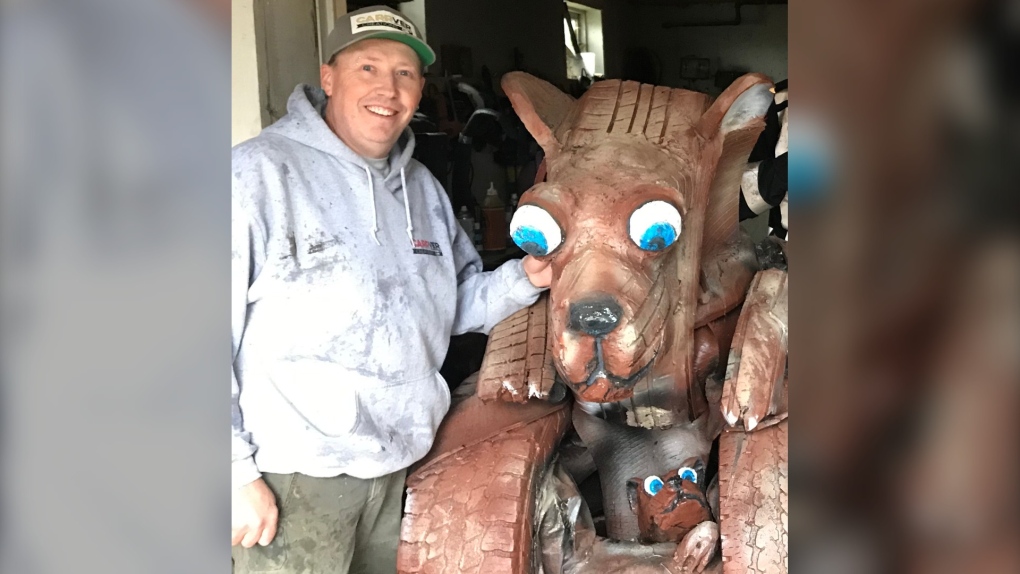 Calgary artist Michael Carr with a kangaroo sculpture that was returned by police after being stolen. (Courtesy Michael Carr)

CALGARY -- The 'roo has been returned.

A kangaroo sculpture stolen from outside a northwest Calgary art studio overnight Sunday was recovered by police Thursday afternoon and returned to its rightful owner.

A neighbour spotted the stolen sculpture – which is more than two metres tall and 1.5 metres wide – in the back yard of a home on 24th Avenue N.E., in the community of Pineridge. It had been taken from outside Michael Carr's art studio in Briar Hill, about 12 kilometres away.

Police said a stolen U-haul van was also recovered at the home in Pineridge, which was used to transport the sculpture. They couldn't speak to a motive. Two people were arrested.

Made out of recycled tires, Carr said the sculpture was damaged during the ordeal.

"I think when they stole it they dropped it on its head, it's lost like two feet," he said. "It's like squished. It was six feet and now it's roughly four feet. And it looks like they were trying to cut it close to the neck."

Carr said he was mystified as to why someone would have stolen the unfinished sculpture – which he was commissioned to build for Cobb's Adventure Park. When police found it, officers were just as mystified as to how they were going to get it back to him.

Police were eventually able to load the kangaroo into the back of a CPS pickup truck and return it to Carr.

He said it will take a few weeks to make repairs and finish the work, then it will be delivered to Cobb's, along with an iguana and a snake.