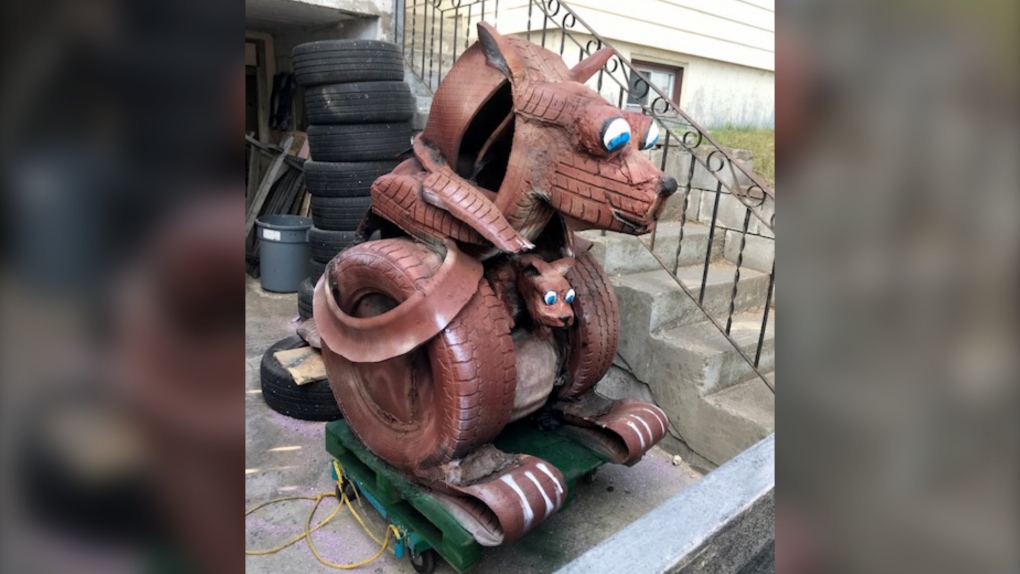 This unfinished sculpture of a kangaroo with a joey in its pouch was stolen from outside a northwest Calgary art studio. (Courtesy Michael Carr)

CALGARY -- Calgary artist Michael Carr says he's equal parts stymied and dismayed by the recent theft of a commissioned project from outside his northwest studio.

For the last several weeks, Carr has been working on a commissioned piece for Cobb's Adventure Park in northeast Calgary at his studio in the northwest community of Briar Hill.

A little more than halfway done at this point, the work is a kangaroo with a joey in its pouch made from recycled tires that was going to be used to take photos with. He's also working on an iguana and a snake for Cobb's, which weren't pilfered.

Adding to the mystery, said Carr, is the fact the kangaroo sculpture is more than two metres tall and 1.5 metres wide, and takes at least two people to lift it.

"It won't fit in my garage anymore so I chained it to the side of my railing," he said.

"And I put a trailer right in front of it … and the person actually picked that up and moved that to the side and cut the chain. It's kind of weird."

Neighbours reported seeing the kangaroo in his yard on 23rd Street N.W. Sunday night and Carr noticed it was gone on Monday morning. The theft has been reported to Calgary police.

An artist for the last 20 years, and working at his current studio for the last eight, Carr said he's never had a piece go missing before.

"I just want to know why … that's all," he said. "In my opinion it's not really valuable other than to Cobb's because they use it as a photo opp."

Carr said he'd like the sculpture returned, no questions asked.