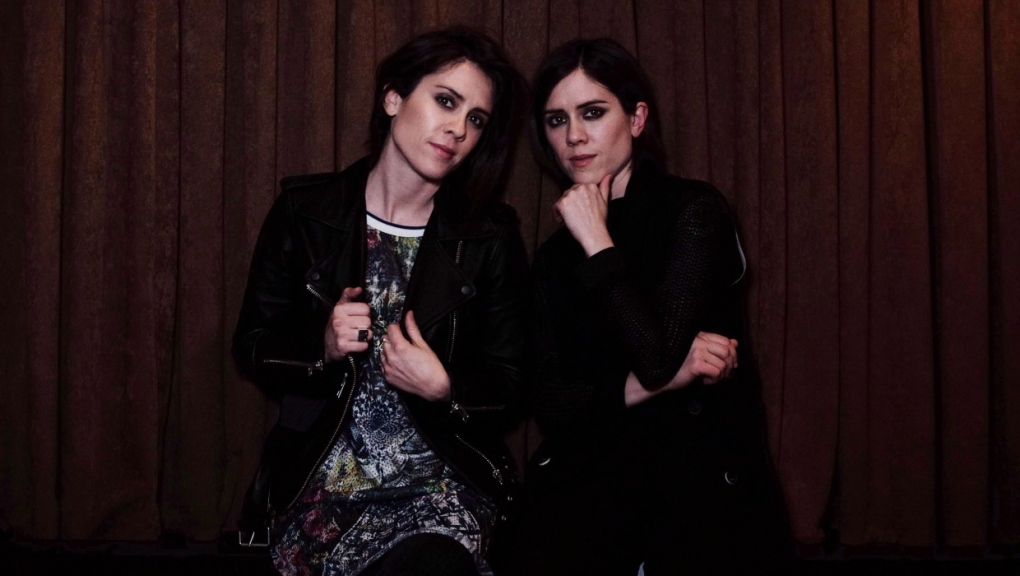 Tegan and Sara pose for a photo in a Toronto restaurant during a press junket on Thursday, May 5, 2016. (THE CANADIAN PRESS/Chris Young)

After filming in Calgary earlier this year, the trailer for Tegan and Sara's new TV series High School has now been released.

The show is based on their 2019 memoir of the same name, in which Tegan and Sara Quinn reflect on their time as teens in Calgary in the 90s attending Crescent Heights High School.

"We grew up in the 1990s, we started our band in the 1990s and we wanted to write our origin story," said Sara Quinn in a 2019 appearance on The Late Show with Stephen Colbert.

"We started writing our first songs at 15, so we wanted to write that story – and then it wasn't just a music memoir, it really started to be about our identity as twin sisters, and as songwriters and as creative people … we're queer as well, so we cover that as well."

Scenes for the series were shot in Calgary this past spring – including at Crescent Heights High School, which can be seen in the show’s trailer.

High School features California-based twins Railey and Seazynn Gilliland, who were discovered through their TikTok account, as the Quinns.

Actress Cobie Smulders, known for her roles as Robyn Scherbatsky in How I Met Your Mother and Maria Hill in multiple Marvel projects, plays their mother.

The mysterious woman who allegedly lured dozens of migrants on Florida Gov. Ron DeSantis' flights to Martha's Vineyard from San Antonio has been identified by several media outlets as a former combat medic and U.S. Army counterintelligence agent living in Tampa.

Toys 'R' Us has released a list of the top toys of 2022 ahead of the holiday season.

Appearing before the House of Commons Finance Committee on Monday, Deputy Prime Minister and Finance Minister Chrystia Freeland defended the government's response to Canadians' affordability concerns as 'focused' and fiscally responsible. With the passage of the GST rebate-boosting bill through the House all but a foregone conclusion, Freeland was peppered with questions from opposition MPs on a range of topics, including inflation.