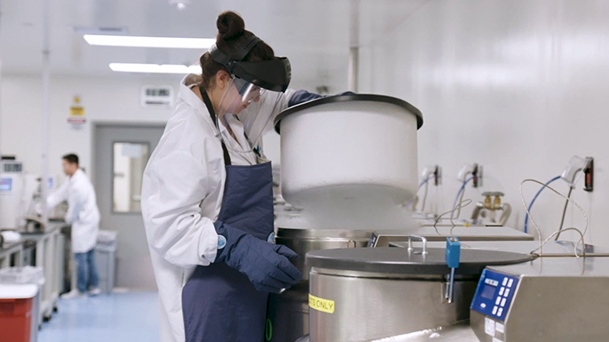 Chimeric antigen receptor T-cell (CAR T) therapy uses a person's own immune cells to fight cancer and will now be offered in Alberta to patients with specific kinds of leukemia and non-Hodgkin lymphoma.

"CAR T-cell therapy has changed the way we approach the treatment of patients with relapsed/refractory non-Hodgkin lymphoma," said Dr. Mona Shafey, MD, FRCPC, hematologist and director of the Alberta Blood and Marrow Transplant Program. "These patients have a very poor prognosis and often die of their disease. The availability of Yescarta gives these patients access to a potentially life-saving treatment."

"It actually offers the potential for cure for patients who have relapsed with their disease, in particular some patients with leukemia, those with aggressive lymphomas, who have tried to treat their cancer the traditional way and unfortunately, haven't responded or they've relapsed after initial response and this treatment has shown to provide responses and durable responses that sometimes leads to cure even after they've failed other therapies," said Dr. Shafey.

The province and Alberta Cancer Foundation announced a $15 million partnership last summer to make the therapy available in Alberta. The province's first treatment program using the product is now open in Calgary and will be launched at two additional sites in the future.

"This is an important milestone as CAR-T treatment becomes more accessible for Albertans facing cancer. We are grateful for the commitment of our donors, Alberta Health and the expertise in Cancer Care Alberta as this new therapy is now being offered across the province for patients who need it most," said Wendy Beauchesne, CEO, Alberta Cancer Foundation.

"This opening offers new hope for patients with certain types of relapsed and refractory lymphomas, who previously faced a dire prognosis," said Antonella Rizza, CEO at Lymphoma Canada. "By taking this step, the Alberta government is ensuring Canadians in this province have access to this new and potentially transformative treatment option."

"Alberta’s government is excited to offer this innovative treatment in our province, providing Albertans who urgently need this care with timely and convenient access here at home," said Tyler Shandro, Minister of Health.

Officials say the first lymphoma patient has already been discharged from the program and is doing well.

Previously, Canadian patients had to travel to the U.S. to receive the YESCARTA® CAR T-cell therapy and officials say about 150 patients in Alberta are expected to be eligible for the treatment here over the next three years.

"Cancer is not an easy road, but for people to be able to have this treatment close to home will be such a blessing for them," said Martha Kandt, patient.

The treatment program at the TBCC is the first program of its kind in Alberta and the third in Canada.

For more information on cancer research and treatment in Alberta, visit the Alberta Cancer Foundation website.