'We're willing to continue that tradition': A spudnut war breaks out in Lethbridge

LETHBRIDGE -- The family behind Lethbridge's original spudnut are concerned that customers are being deceived into believing a Lethbridge grocery store promoting the “Real Spudnut” is not the real deal.

London Road Market General Manager Dave Gurr denied the allegation, saying his move into the spudnut market is a move to fill a hole in the local donut market, left by the closing of Crazy Cakes, which sold spudnuts, last year.

“That was a staple, that was a tradition, and we want to keep that tradition going," Gurr said.

He said the absence of spudnuts is a reflection of how much effort is required to make them.

“It’s a labour intensive process, which is one of the reasons you don't see a lot of scratch bakeries or donut shops for that matter out there anymore. We're willing to continue that tradition.”

But the ad has upset the family of Wolfgang and Angie Otto, who purchased a spudnut business in Lethbridge during the 1960’s, and operated Otto’s Spudnut and Ice Cream shop until 2000.  Wolfgang later came out of retirement to make spudnuts twice a week for Crazy Cakes, which closed its doors last October.

“What it says in the ad, is the real spudnut” said Wolfgang’s daughter Nicole Lakusta, who lives in Stony Plain. “So people are asking us questions. Is your dad supporting this? Is he you know, adding to the spudnut legacy?” 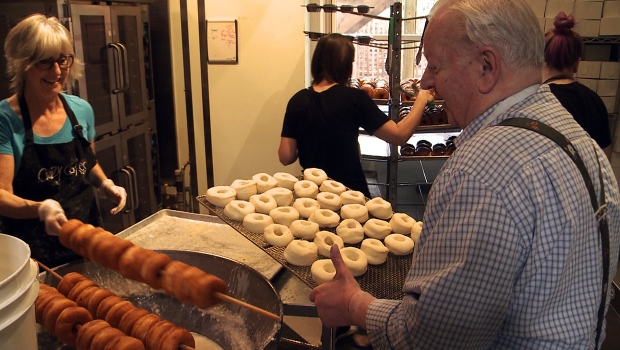 Lakusta said her parents have received inquiries from other bakeries, but have never sold their spudnut recipe.

“It has history (behind it)," she said. "When you say have you had a spudnut, they kind of associate it with of course, my mom and dad’s work.”

She said  the London Road Market ad gives a false impression to people in the community. “We have no problem with them saying, you know we are going to create some products made out of potato flour, we're fine with that; but when you say the real spudnut, that upsets us a little bit.”

Gurr said he has a lot of respect for Wolfgang Otto’s family, pointing out both families have operated businesses in the area for decades. “But the fact of the matter is that there are no trademarks, nothing that say we can’t use the word  'spudnut'," he said.

When he entered the word 'spudnut' in Google, the search engine came up with about 15 recipes from different recipe sites that repeated the phrase “Spudnut is a potato-based donut.”

London Road Market isn’t the only bakery testing the spudnut market, either.  Edible Elegance Cake Shop has also started selling spudnuts once a week on Fridays.  One of the owners told CTV they bring in their donuts and spudnuts from Grandma’s Oven, a bakery in Raymond, but they preferred to make like Switzerland and declined to comment on the potato-based donut war of words.

Gurr said they’ve been working with a master baker to come up with their own spudnut recipe. If the product proves popular, they plan to put a deep fryer in their grocery store, to go all in on providing donuts of every variety for southern Albertans.

“We’re willing to continue that tradition, and if there’s a market for fried donuts in the city of Lethbridge, hopefully we're the ones to champion that trend," he said.

Lakusta said her family is still hoping for “a nice conversation” with London Road Market, and she’s urging the grocery store to be more specific in what there are offering.