Roads are closed around the midtown Co-op after a stolen transport  truck crashed into the west side of the store Thursday afternoon, injuring three people.

Police were called to the Midtown Co-op at around 2:35 p.m., after receiving reports that a large truck drove into the side of the building.

The driver of the truck fled the scene.

Officials say the truck came from eastbound 10th Avenue, then headed south on 11th Street before crashing into the side of the building.

"Too fast," said one witness. "Way too fast. He lost control immediately, he made a turn, he was skidding out and you can see in the (damage to) the building how fast he was going."

A store employee meanwhile described the scene inside the store.

"The fire alarms went off. We could see smoke and dust coming out from the back. We just started evacuating customers and employees out of the building."

The impact of the collision crumbled the bricks of the store wall. 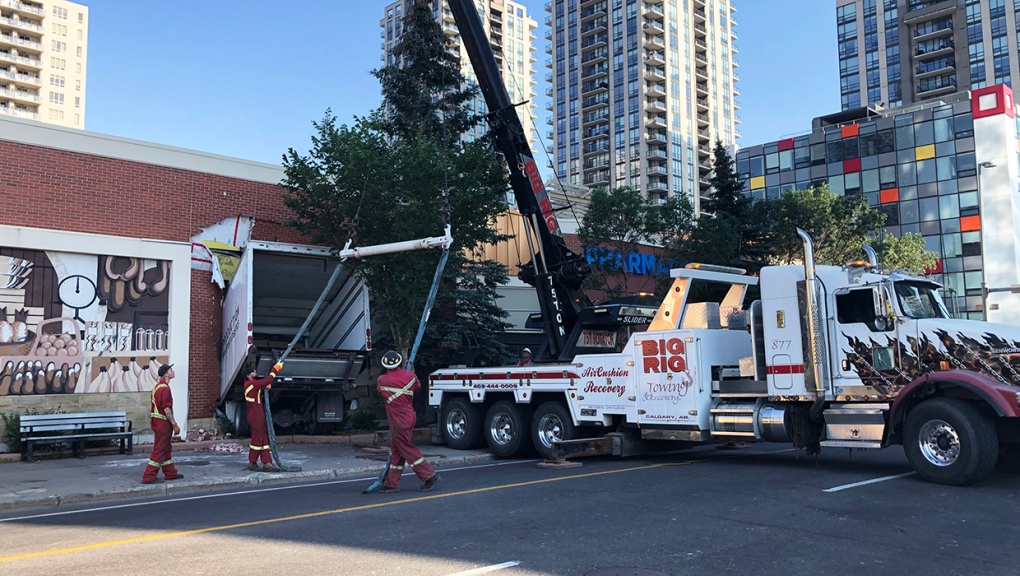 The fire department's heavy rescue crew is working with a city engineer to figure out how to extricate the truck.

CTV News spoke to some Co-op employees, who said that three people were slightly injured in the collision. The employees were taken to hospital as a precaution.

"The store has been evacuated of all customers and staff," said Calgary Fire Department spokesperson Carol Henke. "Staff who need to go in and retrieve things are being escorted by fire department staff, and currently no one is going inside the building until a city engineer has assessed the extent of the structural damage."

A spokesman for the company that owns the truck said it was stolen from in front of an office in Sunalta.

this was a stolen truck - a friend of mine and my brothers contents!!

Police and firefighters are currently on scene. Roads in the area of 11th Avenue S.W. are closed and are expected to remain closed for the next several hours.

Officials advise the public to avoid the area until further notice.

Anyone with information or video or photos can send them to the fire department at piofire@calgary.ca.

Please be advised that roads in the area around Midtown Coop, 11 Avenue S.W., are closed. First responders are on scene of a vehicle that collided with the building.

This is a developing story. It will be updated as more information comes available.

With files from Stephanie Thomas