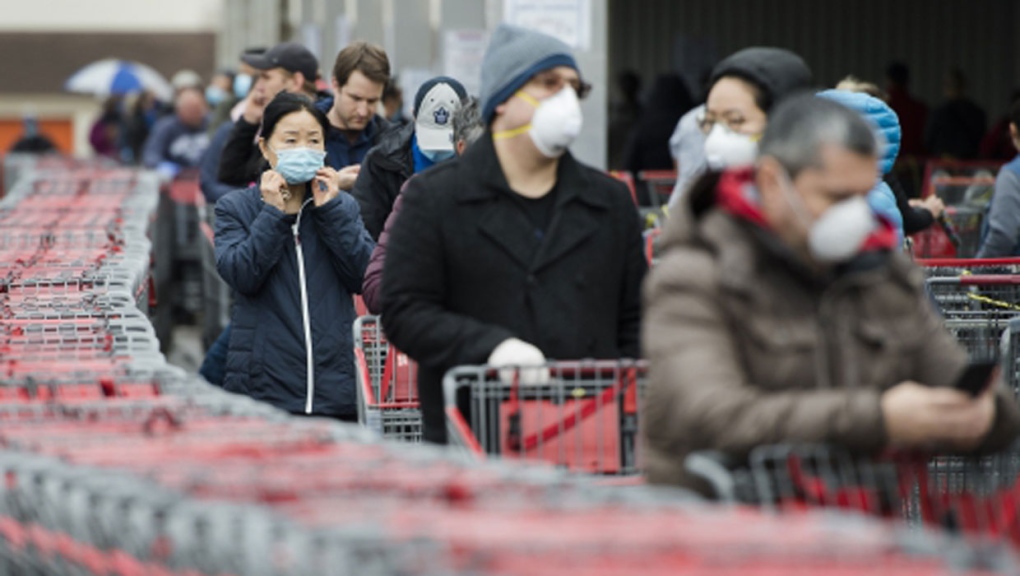 Hundreds of people wait in line to enter Costco in Toronto on Monday, April 13, 2020. Health officials and the government have asked that people stay inside to help curb the spread of COVID-19. THE CANADIAN PRESS/Nathan Denette

CALGARY -- Western Canada's largest private-sector union is proposing that people be limited to one trip to the grocery store each week to prevent the spread of COVID-19 among customers and workers.

Tom Hesse, president of the United Food and Commercial Workers 401, which represents 32,000 workers, said governments should also bring in regulations that allow only one person per family in a store at a time.

“We're going to ask for clear rules that are enforceable with fines in a regulatory regime. The fact of the matter is we can't let these places become nursing homes and it's just a free-for-all in these grocery stores right now,” Hesse told The Canadian Press.

The union suggests loyalty programs and membership cards could be used to track visits and peace officers may be needed to enforce the regulations.

While people can be fined for violating social distancing rules outside, Hesse said it's still unsafe inside the grocery stores.

“I walked down the street from my house and they've got yellow tape around the monkey bars and I'm told that if I get on those monkey bars I can get a $1,000 fine,” he said.

“But they're letting hundreds of people wander through grocery stores. So where's the regulatory regime?”

Hesse said the union will be sending an official proposal to the Alberta government and grocery store chains next week and hopes that a nation-wide implementation will eventually occur. He said government regulation is required because self-regulation by the grocery industry would be “the fox guarding the henhouse.”

An Alberta Health spokesman said there are already plenty of distancing rules in place in grocery stores, as well as hand sanitizer stations and cleaning to maintain high levels of hygiene.

“We recognize the important role that workers at grocery stores are playing during this pandemic,” said Alberta Health spokesman Tom McMillan, in an email.

“We have taken clear steps to protect grocery workers, while ensuring that families have flexibility to continue meeting their needs during this difficult time. If additional measures are needed in the future, we will take them.”

The Federal Department of Labour issued a statement noting the safety of grocery store workers is a provincial jurisdiction.

“We continue to urge all employers to go above and beyond standard health and safety measures to ensure that workers are safe in this extraordinary situation while accommodating reasonable requests from employees,” the statement reads.

Many stores have implemented measures such as one-way aisles and spacing stickers in check-out lines. Shields have also been installed at tills to protect cashiers.

Loblaws said it is also limiting store capacity, not doing returns and asking people to pay with cards.

“We have also asked customers to help us, by reducing the number of visits they take to our stores to once a week or less and to shop alone where possible,” said Loblaws senior director of external communication Catherine Thomas.

“We all have a role to play in keeping each other safe.”

Sobeys did not immediately respond to a request for comment.

This report by The Canadian Press was first published April 17, 2020

'An especially tough time': Feds rolling out targeted COVID-19 help for some sectors

Interactive: Which benefits am I eligible for during the COVID-19 pandemic?

What to expect if you're getting tested for COVID-19

'No fast way back to normal': How some European lockdowns are easing already

Who is getting the virus, and what comes next? B.C.'s latest COVID-19 modelling data unveiled

Ontario reports most COVID-19 deaths, cases in a single day

As millions of workers apply for help, mothers-to-be say they can't get CERB