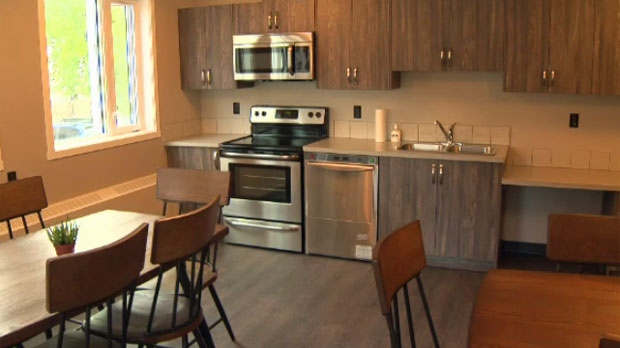 A look inside one of the units in Stepping Stone Manor, an affordable housing apartment building in southwest Calgary

A new affordable housing project is open in southwest Calgary.

Stepping Stone Manor is located at 222 15 Avenue S.W.  and will provide permanent rental housing with integrated supports for 30 homeless and vulnerable Calgarians.

This is an initiative of the RESOLVE Campaign and is the first in a series of purpose-built apartments planned to open between now and 2018.

These apartments are built with provincial government grants and the philanthropic efforts of Calgary’s home building community.

RESOLVE campaign chair and President and CEO of Brookfield Properties, Alan Norris, outlined the project to eight home builders as one step toward ending homelessness in Calgary.

“I was chair of the Calgary Homeless Foundation for many years as well and so I explained the societal issue, the business issue and they all agreed that we need to deal with it,” says Norris.

Scott Haggins, President of Cedarglen Homes says, “It wasn’t much of a decision making process. We all got on board immediately and said yup this is what we can do for Calgary.”

Calgary home builders have each committed to developing a building for the Calgary Homeless Foundation through the RESOLVE Campaign.

“No one gets up in the morning and says I want to be homeless and we wanted to help,” says Haggis.

There have been challenges including finding sites and changing the community’s perception of homelessness and affordable housing.

“A year and a half ago it was difficult but it’s a little easier now,” says Norris. “You still have to go through all the good neighbour agreements and we’re looking at a scattered housing approach so these units are located throughout the city.”

Residents should start moving into the apartments in July.