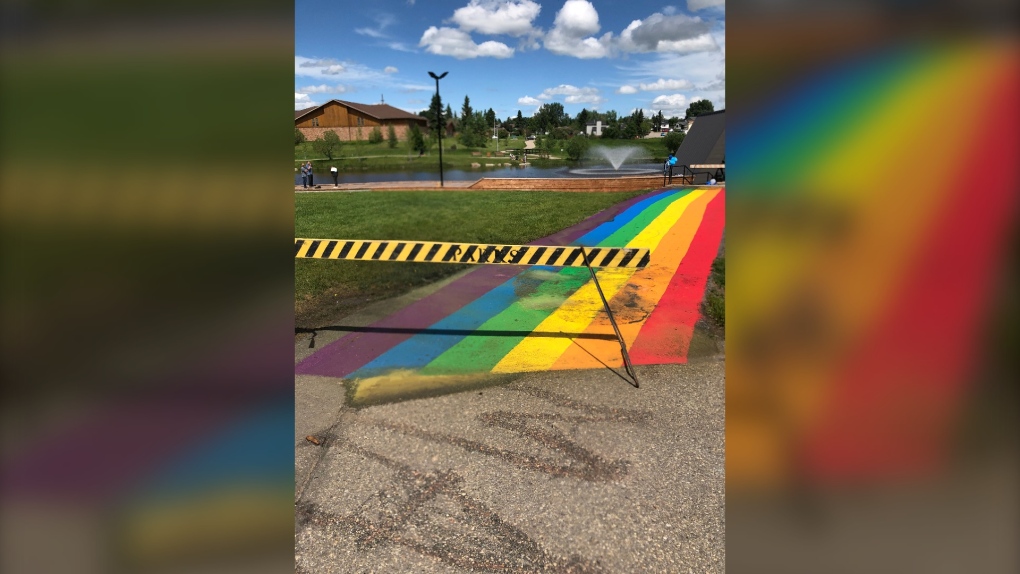 Airdrie RCMP are asking members of the public for help to track down the person or persons responsible for the vandalism inflicted on the community's Rainbow Path.

CALGARY -- A colourful walkway meant to celebrate the LGBTQ+ community in a southern Alberta city has been defaced with tar and feathers.

The Rainbow Path, located in Airdrie's Nose Creek Park, was vandalized sometime overnight by an unknown number of people.

Steve Durrell posted images of the act on social media, calling it an "act of hate."

It's heartbreaking to see acts of hate aimed at the LGBTQ+ community in @City_of_Airdrie again.

The Rainbow Path was defaced again, this time being tarred and feathered. This is hateful, and absolutely unacceptable.

A short time after the post was made, work crews from the city of Airdrie arrived to clean up the mess.

The Airdrie Pride Society, the group in charge of maintaining the pathway, said it costs them hundreds to repaint it.

"We will repaint as often as we need, but this costs us $300 every time we do, which takes away from the programming we offer in the community," it wrote on Facebook.

Police ask the public for help

Airdrie RCMP says this is the second time in the past seven days the Pride pathway has been targeted.

"Last weekend the pathway was also left with offensive graffiti specifically targeting the LGBTQ community. The RCMP take these offenses very seriously and are investigating these incidents," police said in a release Saturday afternoon.

In order to help in the investigation, police have asked anyone who has any surveillance footage, camera recordings or witnessed any suspicious activity to come forward and speak with police. They are specifically looking for information on the activities within and near Nose Creek Regional Park between 3 p.m. June 19 and 11 a.m. June 20 (the date of the first incident) and between 10 p.m. June 26 and 11 a.m. June 27.

Anyone with information is encouraged to contact Airdrie RCMP at 403-945-7267.

If you wish to remain anonymous, you can contact Crime Stoppers by phone at 1-800-222-8477 (TIPS), online at www.P3Tips.com or by using the “P3 Tips” app available through the Apple App or Google Play Store.

Anyone looking to donate to help cover costs of repairs can contact the Airdrie Pride Society by email.