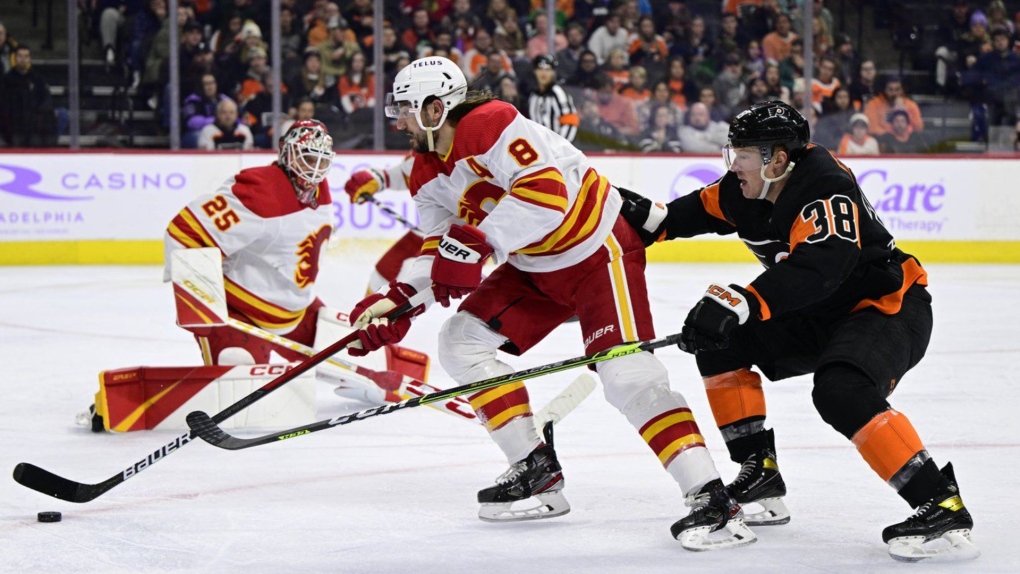 Blake Coleman had a goal and two assists to lead the Calgary Flames to a 5-2 victory over the slumping Philadelphia Flyers on Monday night.

Jonathan Huberdeau, Dillon Dubé, Rasmus Andersson and Trevor Lewis also scored for the Flames, who were playing the third contest of a six-game trip.

“It was nice to get that one, for sure,” Huberdeau said. “We battled. Another good win for us.”

Tanner Laczynski and Joel Farabee scored for the Flyers, who have lost seven in a row.

“We were flat,” Philadelphia coach John Tortorella said. “I thought it looked like two teams with low energy.”

The Flames jumped out to a 2-0 lead in the first.

Huberdeau put the Flames on the board 4:43 in. After Philadelphia’s Tony DeAngelo turned the puck over in the Flyers zone, Huberdeau raced ahead on a 2-on-1 and finished his third goal of the season with a wrist shot past Carter Hart’s glove side.

Dubé tallied in nearly the identical manner with 6:09 to play in the first, firing a wrist shot past Hart on a 2-on-1. This one came from the opposite side and got past Hart’s glove.

“It’s not like it’s lack of effort,” Hart said. “Nothing to hang our heads about.”

Andersson recorded the lone goal of the second when his slap shot from long range went off the stick of Farabee and past Hart 3:29 into the period.

Farabee made amends with 11:57 left in the third, when he pulled Philadelphia within 3-2. Flames winger Andrew Mangiapane misfired a pass from the boards right to Farabee, who fired a wrist shot from the slot past Jacob Markström’s blocker side.

Coleman, playing in his 400th career NHL game, netted the first of two Flames empty-netters with 1:51 left in the third. Lewis finished the scoring with 37 seconds remaining.

A third-round pick by New Jersey in 2011, Coleman is a two-time Stanley Cup champion with Tampa Bay.

“I’m extremely proud to get to play that many games in this league,” he said.

Flames: At Pittsburgh on Wednesday night.

Flyers: At Washington on Wednesday night.