Hundreds of Calgarians gathered at the Military Museums on Saturday to witness real-life battle re-enactments and learn about the historical significance of almost 2,000 years of warfare.

Event host Joel Windsor said it meant  the world to be able to share their beloved hobby with others.

“We have this very unique community of reenactors that we love and to be able to share this with the wider world for the first time in a long time is so important to us,” said Windsor.

“It gives us the energy we need just to be ourselves and that is so important for anybody.”

For Viking reenactors like Aryn Laxton, the event is a chance to interact with her community and members that she hasn’t seen for a couple of years since the pandemic.

“This is this is by far one of our favourite shows because it's just always nice to get the variety of reenactors here,” she said.

“I'm friends with people of a whole bunch of different ages and we hang out afterwards and swap stories and pictures. We get to dress up in cool outfits and beat our friends up with weapons, how cool is that?”

Other local historians like Frank Moody have also been doing re-enactments for the past 25 years with a group of 18th century historians.

He spent his Saturday teaching others about the significance of the 78 Highlander Unit which was a Scottish unit under the British that fought to take over Acadia and during the fall of Quebec.

“It’s fantastic because so many people are interested in history, and we get to fill in the blanks,” he said. 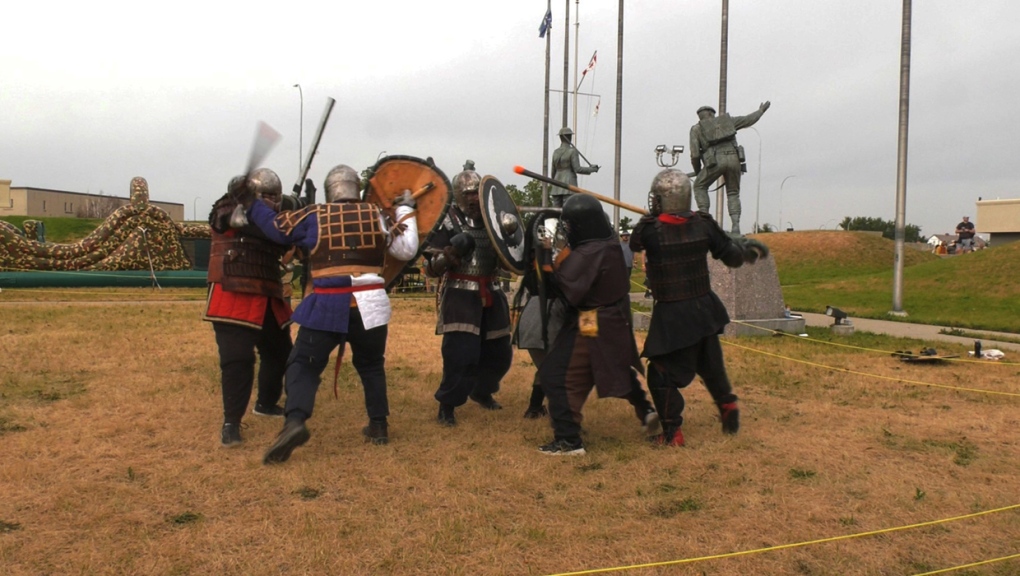 Other local historians like Frank Moody have also been doing re-enactments for the past 25 years with a group of 18th century historians.

“They get to know about the weapons, about lifestyle, about motives, and things like that so it's really great to interact with the people on the field and its fun to fire off these weapons, of course.”

The weapons were not loaded and fired blanks, but it gave attendees of the event a chance to hear how loud they were and experience the aftershock of old cannons used more than 400 years ago.

Attendees of the event had the chance to check out military vehicles from the Vietnam War and get up close and personal with the guns of the golden west that Canada’s first police officers used before formalizing the Royal Canadian Mounted Police.

A reunion and memorial service marking the 74thanniversary of the First Special Service Force that fought in World War Two also took place at the Military Museums on Saturday.

John Hart, who is the son of First Special Service Force member Jeffrey Hart, co-chaired the ceremony and said he appreciates the love and support Calgarians have for their veterans.

"They suffered many, many casualties and deaths along the way and so we try to remember that today the best way we can and that's not just at memorials but it goes on eternally,” said Hart.

Come visit The Naval Museum of Alberta for Navy Days on August 20th and 21st! Come watch the HMCS Tecumseh jazz quartet concert and visit the naval displays and artifacts. Enjoy food trucks and other events at the “Summer Skirmish.” Purchase tickets at: https://t.co/GcYEJ94ikK pic.twitter.com/LRpBsws0P9

The Summer Skirmish at the Military Museums continues with more re-enactments, special demonstrations, and showcases on Sunday.

Admission is $15 for adults and $5 for seniors and children over the age of six. Children under six get in for free.

Tickets also come with access to the Military Museum.

While the federal government was successful in procuring COVID-19 vaccines amid an urgent pandemic situation, the Public Health Agency of Canada (PHAC) fell short when it came to minimizing the number of doses wasted, according to Canada's auditor general.

Critical injuries in plane crash on Highway 401 near Cornwall, Ont.

Two occupants of a small plane were seriously injured when it crashed into the Highway 401 median near Cornwall, Ont. Monday night.

A man was arrested Tuesday on suspicion of assault after an egg was allegedly hurled towards King Charles III during a visit to a town centre, police said.

The Canadian branch of human rights organization Amnesty International says it was the target of a cyberattack it believes was sponsored by the Chinese state.

The suspect accused of entering a Colorado LGBTQ2S+ nightclub clad in body armor and opening fire with an AR-15-style rifle, killing five people and wounding 17 others, was formally charged with hate crimes as well as murder on Tuesday.