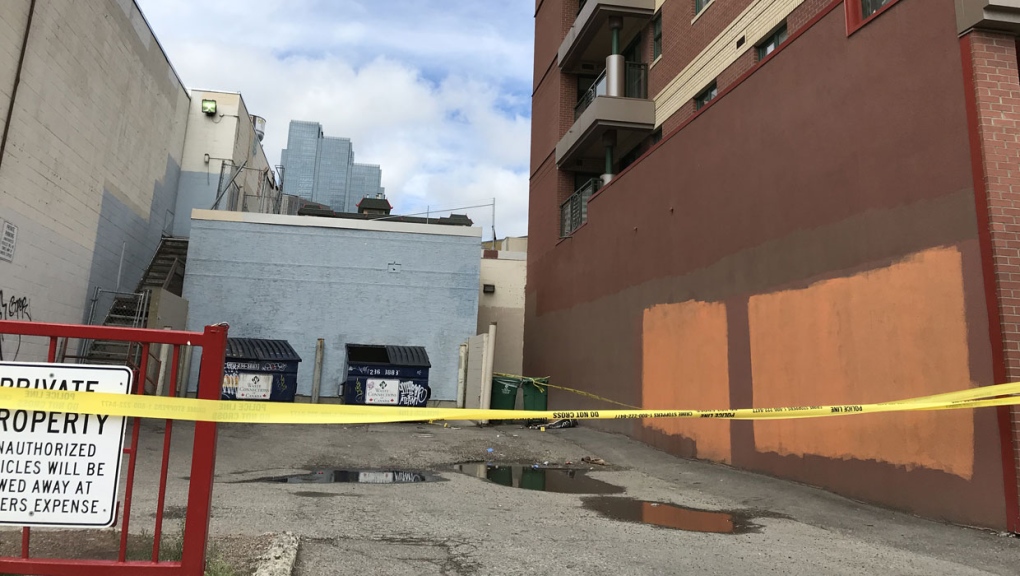 A woman died in Calgary's Chinatown on June 19, 2019 after suffering a five-storey fall. ASIRT confirms she was the suspect in a drug trafficking investigation and the fall occurred during an arrest attempt by CPS members. (File)

The Alberta Serious Incident Response Team has determined Calgary Police Service officers did not commit an offence during the attempted arrest of a suspect who fell five-storeys to her death.

On Friday, ASIRT, the police watchdog organization, released the findings of its investigation into the 2019 death of a 31-year-old woman in Calgary's Chinatown.

According to ASIRT, the woman and her boyfriend were identified as suspected fentanyl traffickers who moved between Airbnb accommodations. The couple had a criminal history and were suspects in two non-fatal shootings that took place in March and May of 2019.

An arrest warrant was issued for the boyfriend in June 2019 and investigators tracked the pair to an apartment building in the 200 block of First Street S.E. where they were living in a fifth-floor suite.

ASIRT says officers witnessed the man and woman "engaging in drug activity within the vicinity of the apartment" and, under the assumption that they might be armed, members of the tactical unit were deployed to the area.

The male suspect was spotted exiting the building shortly before 12:30 a.m. on June 19 and he was arrested without incident.

The female suspect remained inside the suite and tactical unit members set up containment of the unit and attempted to communicate with her over a loudspeaker. After several attempts to speak with her failed, officers attempted to place a camera under the door to see inside but the camera didn't work. A robot was used to knock on the door but the woman didn't answer.

A tactical unit member stationed elsewhere spotted the woman walking out onto the suite's balcony on several occasions. She appeared to throw something over the railing. Officers later recovered a loaded 9 mm Glock handgun with 14 bullets in the magazine.

ASIRT says officers made plans to ram through the hallway door, and send in a robot, the next time there was visual confirmation that the woman was on the balcony.

The woman stepped outside again shortly after 1 a.m. and officers watched as she climbed over the railing in a suspected attempt to gain access to the balcony on the next floor down. It's not known if the woman lost her grip or intentionally jumped, but she plummeted to the ground below.

A tactical EMS member administered first aid on scene. The woman was transported by ambulance to hospital where she died as a result of her injuries.

"The officers on scene were acting in the lawful execution of their duties, and had judicial authorization to enter the residence," said ASIRT executive director Michael Ewenson in his decision. "The affected person was presented with several opportunities over an extended period of time to surrender to awaiting CPS officers by just walking out the apartment door. However, the affected person appears to have attempted to evade the police by leaving the apartment by scaling over and down her fifth floor balcony. It is unknown whether the affected person fell from the balcony after losing her grip or if she intentionally tried to jump to make good her escape.

"While the death of the affected person is tragic, there are no reasonable grounds, nor reasonable suspicion, to believe that any of the officers on scene committed an offence(s)."

Canadians across the country have a shot at seeing the northern lights this weekend thanks to a series of solar flares and storms over the past few days, according to the National Oceanic and Atmospheric Administration.

Former U.S. Vice President Mike Pence said Friday that he didn't take any classified information with him when he left office.

There is now a simple solution to destroying 'forever chemicals': study

Scientists say they have developed a simple and cost-effective method for destroying a class of synthetic chemicals found in many consumer items and lasting in our water, soil and air for thousands of years when left alone.