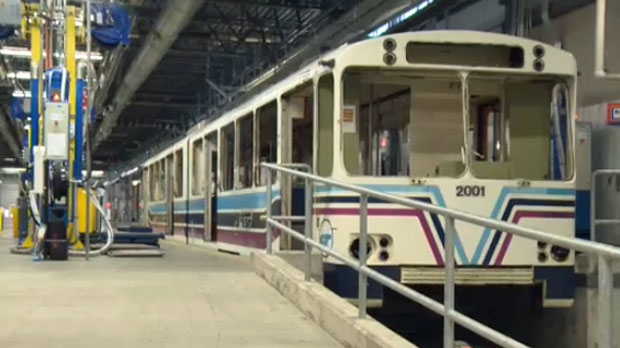 The process of removing the windows and interior of CTrain car 2001 began on November 17, 2016

Following 35 years of service along Calgary’s rails, CTrain 2001 has reached the end of the line for the final time.

On Thursday morning, Calgary Transit crews began the process of scrapping the train for parts.

“2001 is the very first car that Calgary Transit took delivery of back in 1980,” explained Russell Davies, Calgary Transit’s fleet manager. “Over the last 35 years or so, it’s done about 2.5 million kilometres.”

Davies says the car, which was purchased for approximately $750,000, served Calgary Transit and transit riders well but it is time to remove it from the rails. “It had a failure that basically would have cost too much to fix so we basically made the decision to say it’s just not economically viable to keep this one going any longer.”

Car 2001 was one of nearly 80 CTrain cars from the early 1980s still in service or in the shop in 2016 and the fate of the remaining cars will be determined on a case-by-case basis. Davies says not everyone is glad to see the old cars go.

“It’s bittersweet,” said Davies. “If you speak to any of the guys on the shop floor who have been maintaining these things for the last 35 years, there’s some of the guys who absolutely love them. There’s no doubt we have members of the public who love them as well.”

Davies admits the old cars have their detractors. “Then we have other people who can’t wait to get them out the door.”

This year, approximately 300,000 passengers use Calgary Transit’s LRT system on any given day. At the beginning of the 1980s, Calgary’s population had yet to reach the 600,000 mark.